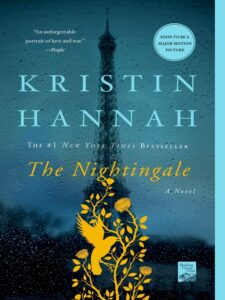 Having just finished The Nightingale, a wonderful novel by Kristin Hannah, I was so excited to read it’s in production to become a movie, with an expected release date of December 2020! I’m not surprised The Nightingale was Goodreads Best Historical fiction novel of 2015 and the People’s Choice Award winner for best fiction in 2015, because it’s a book I didn’t want to put down! Set in France in 1939, it is the story of two sisters, Vianne and Isabelle, who struggle to not only survive the war, but to make a difference in the lives of those around them.  Vianne is living in her home with a German soldier billeting there, raising a daughter and waiting for the husband she loves to return from fighting the war. Isabelle, the younger rebellious sister, joins up with the resistance and embarks on daring rescue missions to save Allied paratroopers, shot down over France. Kristin Hannah weaves this heartbreaking story of survival in WWII, taking the reader into the lives of two women, as they persevere in wartime France. The Nightingale will hook you from the beginning and take you on a historical journey filled with suspense.

The Nightingale is available as an ebook and e-audiobook on Overdrive.

“In love we find out who we want to be. In war we find out who we are. FRANCE, 1939 In the quiet village of Carriveau, Vianne Mauriac says goodbye to her husband, Antoine, as he heads for the Front. She doesn’t believe that the Nazis will invade France…but invade they do, in droves of marching soldiers, in caravans of trucks and tanks, in planes that fill the skies and drop bombs upon the innocent. When a German captain requisitions Vianne’s home, she and her daughter must live with the enemy or lose everything. Without food or money or hope, as danger escalates all around them, she is forced to make one impossible choice after another to keep her family alive. Vianne’s sister, Isabelle, is a rebellious eighteen-year-old girl, searching for purpose with all the reckless passion of youth. While thousands of Parisians march into the unknown terrors of war, she meets Gäetan, a partisan who believes the French can fight the Nazis from within France, and she falls in love as only the young can…completely. But when he betrays her, Isabelle joins the Resistance and never looks back, risking her life time and again to save others. With courage, grace and powerful insight, bestselling author Kristin Hannah captures the epic panorama of WWII and illuminates an intimate part of history seldom seen: the women’s war. The Nightingale tells the stories of two sisters, separated by years and experience, by ideals, passion and circumstance, each embarking on her own dangerous path toward survival, love, and freedom in German-occupied, war-torn France—a heartbreakingly beautiful novel that celebrates the resilience of the human spirit and the durability of women. It is a novel for everyone, a novel for a lifetime.”