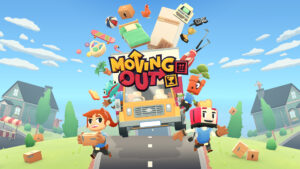 Moving Out is a moving simulator game where you work against the clock to load a van with boxes and furniture, but please don’t stop reading here. You won’t begin to appreciate its anarchic brand of fun until you realize it’s much faster to chuck boxes through a second story window than it is to take the stairs. Along with increasingly harder time goals, each level also comes with three separate and often contradictory challenges (don’t break any glass or break all the glass) for plenty of replay value. Fortunately we have a very generous renewal policy.

While I played it single-player, it is truly intended for the co-op experience. Imagine the fun of arguing about whether your friend means “your” left or “my” left while hauling a bed through a serpentine hallway. Or lobbing boxes of fine china over an in ground pool to a waiting teammate on the other side, whose character’s head is a toaster. Or toggling the flamethrower trap at the right instant (you’ll see).

The game practically begs you to enjoy it by offering some difficulty-relaxing options without shaming you like a cheater. The art style, too, is almost cloyingly appealing and crammed with blink-and-you-miss-it gags that I won’t spoil.

My only complaint is how mushy the controls felt at times. Your character giddily lurches and cantors around even when empty-handed. Some levels require a sober sort of precision which can lead to a lot of frustration after your character’s umpteenth dunk in the red hot guava juice (you’ll see).

Overall it was a blast that had me reluctant to return it.