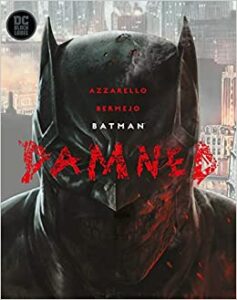 Part of DC Comic’s Black Label, Batman: Damned written by Brian Azzarello and illustrated by Lee Bermejo comes a darker take on the original caped crusader. In volume one of this graphic novel, Azzarello reimagines Bruce Wayne’s origin story and twists it into something far darker. Fans of the classic Batman comics may be surprised by the dark twists and turns that Batman: Damned but it will likely come as no shock to those who were a fan of the Batman video games by Rocksteady as they run along a similar vein. In this grim tale, the reader is faced with a recently attacked Batman who comes to and finds that the body of his nemesis, Joker, has washed up on the Gotham shores. Under the suspicion of the Gotham City Police Department, Batman is forced to team up with hellblazer, and fellow vigilante, John Constantine in order to prove his innocence and figure out what truly happened to the infamous clown prince of Gotham.

This grisly tale is great for an older crowd of comic readers, as the black label indicates this story is for those 18 and up. If the intricately laced story wasn’t enough to entice you to read, the magnificent and gruesome illustrations by Lee Bermejo surely will be. In addition to Batman and Constantine, readers will also be introduced to such characters as the Enchantress and Zatanna Zatara, both of whom blend into the gritty Gotham setting effortlessly.

This DC Black Label comic is one worth reading, and is the perfect segue into a darker storyline featuring heroes and villains many of us all know already. In addition to Batman: Damned, I also recommend reading Harleen, written and illustrated by Stjepan Šejić or DCeased written by Tom Taylor and illustrated by Trevor Hairsine, James Harren, and Stefano Gaudiano.

The first issue is available on Hoopla.