It hasn’t been a great summer reading year for me. Nothing has appealed to me and I can’t seem to stick with ebooks, so I re-read two favorites on my bookshelf that I’ve enjoyed in years past. One is filled with the magic of a special garden, the other captures a slice of summer on the North Shore. 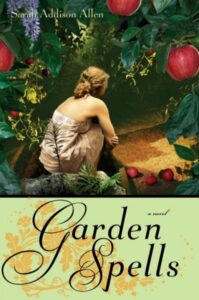 “In a garden surrounded by a tall fence, tucked away behind a small, quiet house in an even smaller town, is an apple tree that is rumored to bear a very special sort of fruit. In this luminous debut novel, Sarah Addison Allen tells the story of that enchanted tree, and the extraordinary people who tend it….

The Waverleys have always been a curious family, endowed with peculiar gifts that make them outsiders even in their hometown of Bascom, North Carolina. Even their garden has a reputation, famous for its feisty apple tree that bears prophetic fruit, and its edible flowers, imbued with special powers. Generations of Waverleys tended this garden. Their history was in the soil. But so were their futures.

A successful caterer, Claire Waverley prepares dishes made with her mystical plants–from the nasturtiums that aid in keeping secrets and the pansies that make children thoughtful, to the snapdragons intended to discourage the attentions of her amorous neighbor. Meanwhile, her elderly cousin, Evanelle, is known for distributing unexpected gifts whose uses become uncannily clear. They are the last of the Waverleys–except for Claire’s rebellious sister, Sydney, who fled Bascom the moment she could, abandoning Claire, as their own mother had years before.

When Sydney suddenly returns home with a young daughter of her own, Claire’s quiet life is turned upside down–along with the protective boundary she has so carefully constructed around her heart. Together again in the house they grew up in, Sydney takes stock of all she left behind, as Claire struggles to heal the wounds of the past. And soon the sisters realize they must deal with their common legacy–if they are ever to feel at home in Bascom–or with each other.” 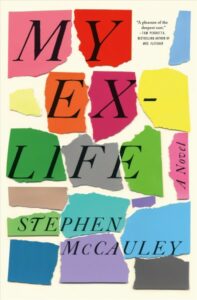 “David Hedges’s life is coming apart at the seams. His job helping San Francisco rich kids get into the colleges of their (parents’) choice is exasperating; his younger boyfriend has left him; and the beloved carriage house he rents is being sold. His solace is a Thai takeout joint that delivers 24/7.

The last person he expects to hear from is Julie Fiske. It’s been decades since they’ve spoken, and he’s relieved to hear she’s recovered from her brief, misguided first marriage. To him.

Julie definitely doesn’t have a problem with marijuana (she’s given it up completely, so it doesn’t matter if she gets stoned almost daily) and the Airbnb she’s running out of her seaside house north of Boston is neither shabby nor illegal. And she has two whole months to come up with the money to buy said house from her second husband before their divorce is finalized. She’d just like David’s help organizing college plans for her seventeen-year-old daughter.

That would be Mandy. To quote Barry Manilow, Oh Mandy. While she knows she’s smarter than most of the kids in her school, she can’t figure out why she’s making so many incredibly dumb and increasingly dangerous choices?

When David flies east, they find themselves living under the same roof (one David needs to repair). David and Julie pick up exactly where they left off thirty years ago―they’re still best friends who can finish each other’s sentences. But there’s one broken bit between them that no amount of home renovations will fix.”