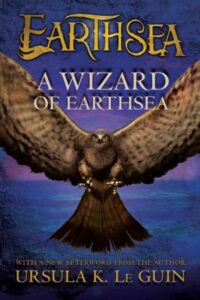 While showing off in a petty contest, power-hungry aspiring wizard Ged accidentally unleashes a shadow upon the world. It maims him, haunts him, and hunts him wherever he goes. Ged must master his wizardry skills and make right in the world. Using words of power and careful reflection, Ged becomes stronger and wiser along his journey to learn the shadow’s true name and banish it. In this origin story, readers follow Ged from early training to his mastery of magic and first great acts. But greater than his mastery of magic is Ged’s education in the application of magic and what it means to be powerful.

Le Guin packs philosophy and perspective into this short fantasy while maintaining a strong pace of action. Le Guin doesn’t hold back with strong philosophical themes in her magic system nor the characters who influence Ged throughout his life. Some of the most powerful philosophical messages about the nature of life, the nature of people, and the greater impact of actions that guide the world come through in her expert dialogue. But the dialogue isn’t overpowering; it’s sprinkled in at the right moments between exciting action scenes, curious learning moments, and suspenseful expeditions. The dialogue fits stylistic trends in classic mid-20th century fantasy, and also demonstrates a mastery of concise, powerful communication. Le Guin uses few words to communicate so much. It was refreshing to read a fantasy with so much story progress and such depth of ideas, in the space of 200 pages.

The audiobook performer made a big difference for my reading experience with this title. My first listen was with Harlan Ellison’s performance. It was emphatic and a bit wild. The voices he created were distinct, but his breathwork and performance of dramatic scenes evidenced a level of creative license greater than some other performers might take. The performance hit some of my pet peeves as a listener, and I came away from the book ready to drop the series–it was so different from what I was used to in fantasy genre, storytelling, and story performance. Fortunately, a friend I read the book with helped me consider revisiting it by highlighting some of its strengths and details I’d missed on this listen.

On my second listen, I tried Rob Iglis’s performance. The pacing was more comfortable and the voice acting didn’t distract from the story or take as much creative license with the dialog tones. Dramatic scenes still felt intense, but I felt more empowered to make my own sense of how characters felt and spoke. Between this performance, and the fact that it was a second read, the content and the craft of the book sank in better this time.

Re-reading this title transformed what I took away from it and greatly changed my impression of Le Guin’s writing style. I’m glad I gave it a second try, and I look forward to revisiting it many more times.

Check out A Wizard of Earthsea by Ursula K. Le Guin, available in print, eBook, CD audiobook, and digital audiobook.