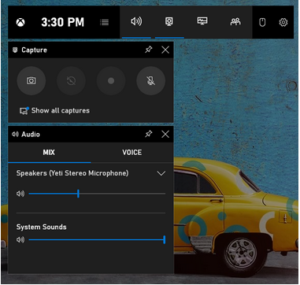 Recently I’ve been producing tutorial videos on our digital resources collection. Essential to shooting these videos is a good screen recording program. There are an abundance of programs for both Mac and Windows operating systems out there, but I wanted to start with something basic.

Windows 10 comes with one built-in app that allows users to record their screen: Xbox Game Bar. Xbox is a video game brand owned by Microsoft, and with Windows 10, it appears they included this app aimed at computer gamers for the purpose of recording gameplay.

After exploring, making several recordings, and seeing how the results held up against what I needed to accomplish, I put together a list of design pros and cons for Xbox Game Bar:

The limited settings for the video component as well as the shooting process make it clear this app wasn’t developed for much other than fullscreen gameplay recordings, but I gave it a shot. You’ll see the final cut (edited using Blackmagic Design’s DaVinci Resolve 16) in my upcoming tutorial on accessing our Boston Globe database from ProQuest.

The verdict: this app is handy and can work in a pinch for simple recordings. It’s best suited for videos focused on the content of a window. However, those seeking more polished recordings that require less editing during production and highlight actions taking place in windows should try some of the other options out there.