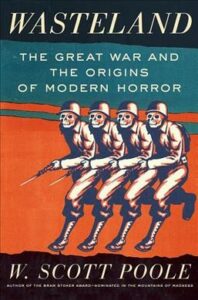 “From Nosferatu to Frankenstein’s monster, from Fritz Lang to James Whale, the touchstones of horror can all trace their roots to the bloodshed of the First World War. Bram Stoker Award nominee W. Scott Poole traces the confluence of military history, technology, and art in the wake of World War I to show how overwhelming carnage gave birth to a wholly new art form: modern horror films and literature.”

In either March or April, having fallen down a WWI rabbit hole, I read Paul Fussell’s The Great War and Modern Memory, a book with one lens firmly focused on the literature, poetry, and letters produced by WWI soldiers during the war and in its aftermath. Its second lens is wider but every bit as keen, surveying the events that led up to the war, the significant decisions made in the wake of those events, and the war’s major engagements. Dense and informative are descriptors that come immediately to mind, and while it’s not absolutely necessary, I found that some understanding of literary theory and devices (irony, in particular) was a good thing to have at the ready while reading.

Wasteland, on the other hand, requires nothing but a willingness on the readers’ part to explore the dark corners of trenches and battlefields and the human psyche. Poole’s style is highly engaging; the first of my jotted-down notes was a comment on the writing, how vivid it was, how details were presented with a flair that made them memorable. That flair made Poole’s thesis even more persuasive—and propped it up a bit when the examples/evidence provided became somewhat repetitious. This engrossing, unusual view of WWI offers up a great deal of food for thought and will exponentially increase your to-watch and to-read list.

Continuing on in this vein, one of my next reads will be John Garth’s Tolkien and the Great War.

A woefully brief, obviously incomplete accounting of the works referenced in Wasteland:

Frankenstein – Mary Shelley (e-book)
“A timeless, terrifying tale of one man’s obsession to create life—and the monster that became his legacy.”

M (Film)
“When the police in a German city are unable to catch a child-murderer, other criminals join in the manhunt.”

The Strange Case of Dr. Jekyll & Mr. Hyde – Robert Louis Stevenson (e-book)
“Depicts the gripping struggle of two opposing personalities — one essentially good, the other evil — for the soul of one man.”

The Golem (Film)
“Story is set in medieval Prague. The Rabbi gives life to the Golem who falls in love with the Rabbi’s daughter and brings fear to the emperor’s court. He is destroyed by an innocent child. Based on the legend of the Golem, a popular figure in Jewish tradition.”

The Waste Land – T. S. Eliot
“While recovering from a mental collapse in a Swiss sanitarium in 1921, T. S. Eliot finished what became the definitive poem of the modern condition, one that still casts a large and ominous shadow over twentieth-century poetry. Built upon the imagery of the Grail legend, the Fisher King, and ancient fertility cults, “The Waste Land” is both a poetic diagnosis of an ailing civilization and a desperate quest for spiritual renewal. Through pastiche and collage Eliot unfolds a nightmarish landscape of sexual disorder and spiritual desolation, inhabited by the voice (literary, historical, mythic, contemporary) of an unconscious that is at turns deeply personal and culturally collective.”

J’Accuse (Film)
“J’accuse is a World War I drama considered to be one of the most technically advanced films of the era and the first major pacifist film. It was referred to by Gance as “a human cry against the bellicose din of armies.” Stars Marise Dauvray as Edith, a young woman who is unhappily married to an older man, François (Séverin-Mars), but is actually in love with a young poet Jean Diaz (Romuald Joubé). Both Jean and François end up on the front lines of World War I while Edith is captured by German forces and suffers atrocities at the hands of the soldiers. Gance contrasts individual human suffering with the larger horrors of wars, depicted with stark realism.”

Night of the Living Dead (Film)
“In this renowned horror classic, high radiation levels bring the newly dead back to life as flesh-eating zombies.”

World War Z – Max Brooks (e-book)
“The Zombie War came unthinkably close to eradicating humanity. Max Brooks, driven by the urgency of preserving the acid-etched first-hand experiences of the survivors, traveled across the United States of America and throughout the world, from decimated cities that once teemed with upwards of thirty million souls to the most remote and inhospitable areas of the planet. He recorded the testimony of men, women, and sometimes children who came face-to-face with the living, or at least the undead, hell of that dreadful time. World War Z is the result. Never before have we had access to a document that so powerfully conveys the depth of fear and horror, and also the ineradicable spirit of resistance, that gripped human society through the plague years.”

“The Bowmen” and “The Great God Pan” – Arthur Machen
“‘The Bowmen’ is the iconic story of an incident from the First World War trenches. Faced with inevitable death and defeat, a battalion of English soldiers is saved by the mysterious and miraculous intervention of Saint George and a company of English bowmen who had last fought at Agincourt.”

The Doll (Film)
“Forced into marriage by his uncle, a man decides to fool him by marrying a life-like mechanical doll instead.”

In the Penal Colony – Franz Kafka
“‘In the Penal Colony’ describes the last use of an elaborate torture and execution device that carves the sentence of the condemned prisoner on his skin before letting him die, all in the course of twelve hours.”

Vampyr (Film)
“A young traveler finds a remote castle, and starts seeing mysterious things, only to find that his own nightmares are coming true.”

The Penalty (Film)
“When an incompetent doctor amputates the legs of a young boy, he has no idea that the youth will grow up to be the immoral and embittered Blizzard, a criminal mastermind who orchestrates a bizarre and heinous plot to avenge himself upon his malefactor.”

Storm of Steel – Ernst Junger
“Young, tough, patriotic, but also disturbingly self-aware, Ernst Jünger exulted in the Great War, which he saw not just as a great national conflict but also—more importantly—as a unique personal struggle. Leading raiding parties, defending trenches against murderous British incursions, simply enduring as shells tore his comrades apart, Jünger keeps testing himself, braced for the death that will mark his failure.”

Gods and Monsters – Christopher Bram
“Previously titled Father of Frankenstein, this acclaimed novel was the basis for the 1998 film starring Sir Ian McKellen, Lynn Redgrave, and Brendan Fraser. It journeys back to 1957 Los Angeles, where James Whale, the once-famous director of such classics as Frankenstein and Bride of Frankenstein, is living in retirement, haunted by his past. Rescuing him from his too-vivid imagination is his gardener, a handsome ex-marine. The friendship between these two very different men is sometimes tentative, sometimes touching, often dangerous and always captivating.”

The Testament of Dr. Mabuse (Film)
“Locked away in an asylum for a decade and teetering between life and death, the criminal mastermind Doctor Mabuse (Rudolf Klein-Rogge) has scribbled his last will and testament: a manifesto establishing a future empire of crime. When the document’s nefarious writings start leading to terrifying parallels in reality, it’s up to Berlin’s star detective, Inspector Lohmann (Otto Wernicke, reprising his role from M) to connect the most fragmented, maddening clues in a case unlike any other.” [X]