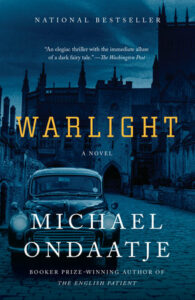 “We order our lives with barely held stories. As if we have been lost in a confusing landscape, gathering what was invisible and unspoken…sewing it all together in order to survive…”

Nathaniel and his sister Rachel were children when their parents left them in the care of a man they called The Moth. The connection between their mother Rose and The Moth was a plucked string: there undoubtedly was one—their history resonated silently in every room they shared—but it was blurred. Nathaniel and Rachel only knew the two had worked together, once, during the war. And that Rose trusted The Moth enough to watch over her children. Characters of all kinds—The Pimlico Darter, a female ethnographer, beekeepers and barge owners—passed through their adolescent lives, each one leaving behind an impression, a lesson, and unbeknownst to them, keeping them safe from the consequences of their mother’s wartime actions. Determined to know Rose and all of her various sins—to understand why she left them—Nathaniel spends years of his adulthood looking over his shoulder at his childhood while digging into his mother’s past to uncover the role she played in World War II.

Nathaniel is Warlight‘s retrospective narrator, relating events from his childhood and adolescence in such a way as to give the reader the impression of being a passenger in his borrowed car (undoubtedly the Darter’s blue Morris; Nathaniel’s fondness for it is unquestionable). It was clear from the start Nathaniel’s route was predetermined. That he knew where and when to accelerate, when to slow down in anticipation of a curve, and that he had long-since decided on the best (or his preferred) vantage points and places to stop along the way. In terms of structure, it was remarkably effective: I quickly fastened my seatbelt, keen to see the sights, willing to stay in the car however long the journey lasted. (One of Ondaatje’s strengths, in my opinion, is his sense of and way with structure. A good thing, considering a number of his novels unfold in a nonlinear fashion.)

While quite a few of them were roughly sketched, the characters that breeze into and out of Nathaniel’s life were a compelling and memorable bunch, each one drawing you deeper into the story. How were they connected to The Moth? Was it possible they were who they claimed to be? Were they all, like Nathaniel’s mother, in some way involved in covert operations during the war? I had to know the answer to those questions and then some, and what’s more, there was at least one character (Arthur McCash, to name names) that if Ondaatje were to write an entire book about him, I would devour it whole. (Another of Ondaatje’s strengths: He provides just enough information about a character to ensnare you, to ensure you simply have to know more.)

As Warlight kept a soft focus on aspects of WWII, particularly on the consequences of covert actions (an example: broken codes and ciphers that tipped the balance in favor of Allied forces and the risk involved for those individuals who then relayed and acted on pertinent information), there was an underlying, simmering sense of threat throughout the story. As he’s looking back on it, Nathaniel knew full well when and how that threat will manifest, but he spread out his dropped crumbs, the pieces the reader would need to put the past together, and the result was something like a slow, inexorable walk to a somewhat obscured cliff face. (The tension was potent when, for instance, teenaged Nathaniel was followed, obviously being pursued with intent by men he did not recognize, for then unknown reasons. I found myself waiting for the men to hurt Nathaniel or kidnap him, constantly on the edge of that concern.)

Along with the structure of his novels, I’m a fan of Ondaatje’s writing style: poetic, observant, scored with lines that sneak up on you and refuse to let go. My next foray into his work will be In the Skin of a Lion, the follow-up to The English Patient.