Did you know we already have a collection of full-cast radio dramas on CD? We do! Titles range from Agatha Christie’s mysteries to David Tennant reprising his role as the Tenth Doctor to comedies such as Cabin Pressure and Jeeves and Wooster (and plenty more besides). Below are a few new-to-the-library dramas that will soon be available to borrow. 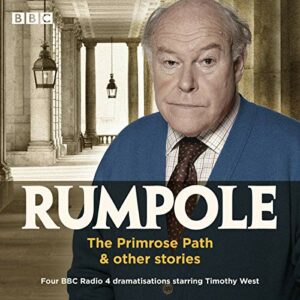 “Rumpole and the Primrose Path

Rumpole exposes criminal practices at the nursing home where he was sent to recuperate after a heart attack, leaving him in dire need of claret, cheroots and good company.

Rumpole and the Scales of Justice

When Rumpole defends a senior policeman in court, his love for Shakespeare’s Othello, and his old acquaintances in the south London criminal fraternity prove very useful.

Rumpole and the Vanishing Juror

Rumpole’s admiration for the integrity of the Old Bailey jury is legendary – but he is mystified when his most promising juror in a murder trial suddenly disappears….

Invited to dinner at his local prison, Rumpole, solves the conundrum of whether an ex-con can be reformed – while also seeking redemption himself. 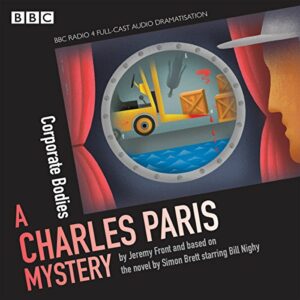 Charles Paris (unsuccessful actor, bad husband, dipsomaniac) is currently appearing as a fork lift operator in a corporate video. It’s not prime-time television or a major film, but it seems like easy money – until the fork lift is used to commit a murder.

When Charles himself comes under suspicion, he decides to find out for himself who the murderer is. Meanwhile, as ever with Charles, life on the domestic front is not plain sailing. After inflicting damage upon his ex-wife’s house, he finds himself offering her a berth on the houseboat he’s currently sitting for a friend. However, life on the water proves as tricky as life at work….

Suzanne Burden, Tim McInnery, and Jon Glover are also among the cast in this dramatisation by Jeremy Front.” 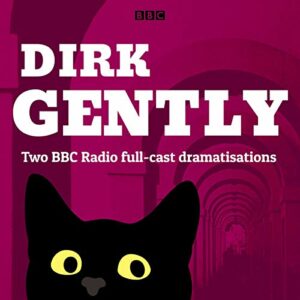 In Dirk Gently’s Holistic Detective Agency Dirk Gently has an unshakable belief in the interconnectedness of all things, but his Holistic Detective Agency mainly succeeds in tracking down missing cats for old ladies. Then Dirk stumbles upon an old friend behaving bizarrely – and he’s drawn into a four-billion-year-old mystery that must be solved if the human race is to avoid immediate extinction.

In The Long Dark Tea-Time of the Soul Harry Enfield exuberantly returns as Dirk Gently, who, fallen on hard times and dressed as a gypsy woman, is using his irritatingly accurate clairvoyant powers to read palms. He is saved when a frantic client turns up with a ludicrous story about being stalked by a goblin waving a contract accompanied by a hairy, green-eyed, scythe-wielding monster. When Detective Superintendent Gilks decides a headless body found in a sealed room is the result of a particularly irritating suicide, Dirk is plunged into a mystery where the interconnectedness of all things is tested to the limit. 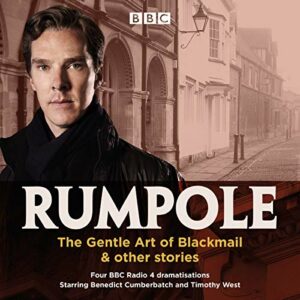 ‘Rumpole and the Man of God’: It is 1959, and Rumpole must defend a clergyman accused of shoplifting who, although he clearly did not commit the crime, is curiously reluctant to be cross-examined under oath. Meanwhile, Hilda (she who must be obeyed) has big news….

‘Rumpole and the Explosive Evidence’: Rumpole defends a well-known safe blower and exposes the underhand behaviour of one Dirty Dickerson, a senior police officer who is quite prepared to tamper with evidence.

‘Rumpole and the Gentle Art of Blackmail’: In 1964 Rumpole returns to Oxford, where he studied law, to defend a young gardener who is accused of blackmailing the Master of St Joseph’s College. Their friendship had provoked rumours of homosexuality – still illegal in those days – and the Master says he has been threatened with a public accusation.

‘Rumpole and the Expert Witness’: Rumpole is asked to defend a GP, Dr Ned Dacre, who is accused of murdering his wife, Sally. The plot thickens when the local pathologist turns out to have history with Dr Ned….” 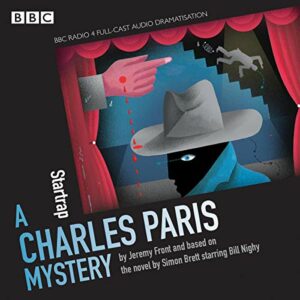 When Charles Paris’ agent rings with the news that he has a part for him in a new musical, Charles is delighted – and somewhat amazed, as he can neither sing nor dance.

But Maurice has an ulterior motive: as one of the show’s backers, he wants Charles to play detective and investigate a series of accidents that have dogged the production. The pianist has been shot in the hand, and another cast member fell downstairs – or was he pushed? Anxious about their investment and their star, Chris Watt, the ‘angels’ are keen to ensure that nothing else goes wrong.

Joining the company, Charles discovers that Chris, although amazingly talented, is a prima donna who has made enemies of almost everyone. When the accidents resume, it begins to look as if anyone who disagrees with him is being targeted. But would the star really sabotage his own show? Charles must find out – before things turn murderous….