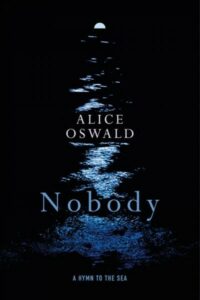 “This is a book-length poem – a collage of water-stories, taken mostly from the Odyssey – about a minor character, abandoned on a stony island. It is not a translation, though, but a close inspection of the sea that surrounds him. There are several voices in the poem but no proper names, although its presiding spirit is Proteus, the shape-shifting sea-god. We recognise other mythical characters – Helios, Icarus, Alcyone, Philoctetes, Calypso, Clytemnestra, Orpheus, Poseidon, Hermes – who drift in and out of the poem, surfacing briefly before disappearing.

Reading Nobody is like watching the ocean: a destabilising experience that becomes mesmeric, almost hallucinatory, as we slip our earthly moorings and follow the circling shoal of sea voices into a mesh of sound and light and water – fluid, abstract, and moving with the wash of waves. As with all of Alice Oswald’s work, this is poetry that is made for the human voice, but this poem takes on the qualities of another element: dense, muscular and liquid.

one person has the character of dust

another has an arrow for a soul

but their stories all end 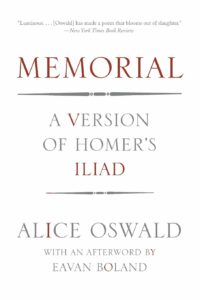 Alice Oswald treads the ground covered in the Iliad in her book, Memorial:

“In this daring new work, the poet Alice Oswald strips away the narrative of the Iliad―the anger of Achilles, the story of Helen―in favor of attending to its atmospheres: the extended similes that bring so much of the natural order into the poem and the corresponding litany of the war-dead, most of whom are little more than names but each of whom lives and dies unforgettably and unforgotten in the copious retrospect of Homer’s glance. The resulting poem is a war memorial and a profoundly responsive work that gives new voice to Homer’s level-voiced version of the world. Through a mix of narrative and musical repetition, the sequence becomes a meditation on the loss of human life.”