Do you enjoy hiking? Listed below are three amazing non-fiction books for those of you that enjoy reading about mountain adventures. All three books take place in the familiar White Mountains of New Hampshire. Although with a similar setting each book comes with their own powerful lessons to be learned. Even if hiking is not your cup of tea, learning about the history, tragedies, and hope that takes place on the mountains is incredibly inspiring.

” In every walk with nature one receives far more than he seeks.”
-John Muir 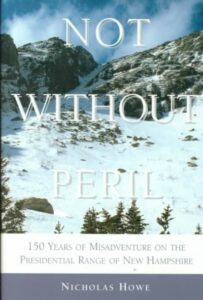 History: Not Without Peril: 150 Years Of Misadventure On The Presidential Range Of New Hampshire by Nicholas Howe

“Among the most dangerous mountains in the world, Mount Washington has challenged adventurers for centuries with its severe weather. From the days when gentlefolk ascended the heights in hoop skirts and wool suits to today’s high-tech assaults on wintry summits, this book offers extensive and intimate profiles of people who found trouble on New Hampshire’s Presidential Range, from the nineteenth century through the present day. Veteran journalist Nicholas Howe draws on his investigative skills and familiarity with the mountains of his childhood to create this gripping collection. The result is a compelling story about our changing relationship with the mountains we love and the risks they pose. This Tenth Anniversary Edition includes a new afterword by Nicholas Howe, with commentary on how our relationship with the Presidential Range has evolved over the last decade” 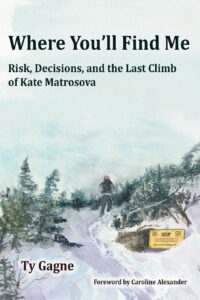 Tragedy: Where You’ll Find Me: Risk, Decisions, and the Last Climb of Kate Matrosova by Ty Gagne

“On Feb. 15, 2015, Kate Matrosova, an avid mountaineer, set off before sunrise for a traverse of the Northern Presidential Range in New Hampshire’s White Mountains. Late the following day, rescuers carried her frozen body out of the mountains amid some of the worst weather ever recorded on these deceptively rugged slopes.

At thirty-two, Matrosova was ultra-fit and healthy and had already summitted much larger mountains on several continents. Her gear included a rescue beacon and a satellite phone. Yet, despite their best efforts, more than forty expert search and rescue personnel, a New Hampshire Army National Guard Blackhawk helicopter, and a Civil Air Patrol Cessna airplane could not reach her in time to save her.

Where You’ll Find Me offers possible answers to that question, demonstrating why Matrosova’s story—what we know and what we will never know—represents such an intriguing and informative case study in risk analysis and decision-making.” 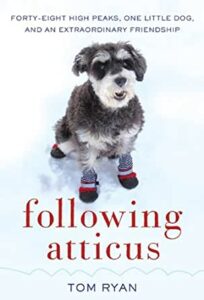 “Set against the backdrop of New Hampshire’s White Mountains, a man and a dog embark on the challenge of a lifetime in this true story of love, loss, and the resilience of the human and animal spirit.

After a close friend died of cancer, middle-aged, overweight, acrophobic newspaperman Tom Ryan decided to pay tribute to her in a most unorthodox manner. Ryan and his friend, miniature schnauzer Atticus M. Finch, would attempt to climb all forty-eight of New Hampshire’s four-thousand-foot peaks twice in one winter while raising money for charity. It was an adventure of a lifetime, leading them across hundreds of miles and deep into an enchanting but dangerous winter wonderland. At the heart of the amazing journey was the extraordinary relationship they shared, one that blurred the line between man and dog.

Following Atticus is an unforgettable true saga of adventure, friendship, and the unlikeliest of family, as one remarkable animal opens the eyes and heart of a tough-as-nails newspaperman to the world’s beauty and its possibilities.”