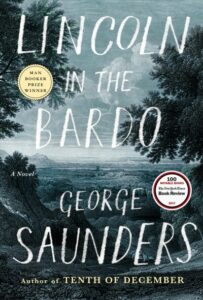 Next up on Chris’ to be read list: Lincoln in the Bardo – George Saunders

“February 1862. The Civil War is less than one year old. The fighting has begun in earnest, and the nation has begun to realize it is in for a long, bloody struggle. Meanwhile, President Lincoln’s beloved eleven-year-old son, Willie, lies upstairs in the White House, gravely ill. In a matter of days, despite predictions of a recovery, Willie dies and is laid to rest in a Georgetown cemetery. “My poor boy, he was too good for this earth,” the president says at the time. “God has called him home.” Newspapers report that a grief-stricken Lincoln returns, alone, to the crypt several times to hold his boy’s body.

From that seed of historical truth, George Saunders spins an unforgettable story of familial love and loss that breaks free of its realistic, historical framework into a supernatural realm both hilarious and terrifying. Willie Lincoln finds himself in a strange purgatory where ghosts mingle, gripe, commiserate, quarrel, and enact bizarre acts of penance. Within this transitional state—called, in the Tibetan tradition, the bardo—a monumental struggle erupts over young Willie’s soul.

Lincoln in the Bardo is an astonishing feat of imagination and a bold step forward from one of the most important and influential writers of his generation. Formally daring, generous in spirit, deeply concerned with matters of the heart, it is a testament to fiction’s ability to speak honestly and powerfully to the things that really matter to us. Saunders has invented a thrilling new form that deploys a kaleidoscopic, theatrical panorama of voices to ask a timeless, profound question: How do we live and love when we know that everything we love must end?” 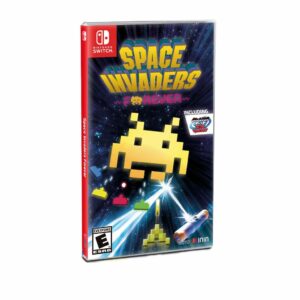 Next up in Nintendo Switch games: Space Invaders Forever

“Welcome to the new invasion! Space invaders is a founding block of video game history that filled the arcades. In this special and amazing three game collection one of the most important arcade classic of video game history is back! p space invaders extreme p classic gameplay with enhanced visuals and sound! Space invaders extreme has arrived to invade consoles with greatly improved graphics and interactive sound to deliver a new immersive experience! Packed with vibrant visuals and a pulsing soundtrack. Space invaders extreme comes with 16 stages, packed with devious invaders and fiendish boss fights. Practice individual stages in Free play, then boost your High score to new heights in arcade Mode! Can you find all the countless, hidden bonuses? P space invaders gigamax 4 se p couch multiplayer for up to four players. Space invaders gigamax 4 SE will finally be available on consoles as part of the forever collection.Team up with up to 3 friends to shoot down the invaders to clear the stages as fast as possible. This brand new 4-player-coop-experience offers new stages, gimmicks and new music written by Taito’s in-house sound team ‘zuntata’ p arkanoid vs. Space invaders p for the first time ever available on a console! A crossover of arkanoid and space invaders. Arkanoid vs. Space invaders is the perfect Union of two arcade kings. Two of Taito’s most iconic and beloved video game series clash on console and combine elements from both arcade classics. Players are controlling the arkanoid vaus paddle ship to defeat waves of space invaders.Beat all 150 stages with your skills and unlock 40 different characters from the Taito legacy. Each character has unique abilities – Use more than 20 different skills, including power-ups and protective fire. Are you ready to defeat the huge 3D Invader bosses and save the galaxy?”