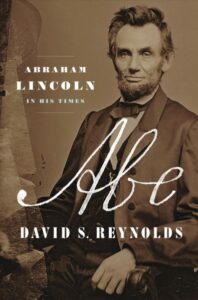 Abe : Abraham Lincoln in His Times – David Reynolds
“From one of the great historians of nineteenth-century America, a revelatory and enthralling new biography of Lincoln, many years in the making, that brings him to life within his turbulent age.

David S. Reynolds, author of the Bancroft Prize-winning cultural biography of Walt Whitman and many other iconic works of nineteenth century American history, understands the currents in which Abraham Lincoln swam as well as anyone alive. His magisterial biography Abe is the product of full-body immersion into the riotous tumult of American life in the decades before the Civil War.

It was a country growing up and being pulled apart at the same time, with a democratic popular culture that reflected the country’s contradictions. Lincoln’s lineage was considered auspicious by Emerson, Whitman, and others who prophesied that a new man from the West would emerge to balance North and South. From New England Puritan stock on his father’s side and Virginia Cavalier gentry on his mother’s, Lincoln was linked by blood to the central conflict of the age. And an enduring theme of his life, Reynolds shows, was his genius for striking a balance between opposing forces. Lacking formal schooling but with an unquenchable thirst for self-improvement, Lincoln had a talent for wrestling and bawdy jokes that made him popular with his peers, even as his appetite for poetry and prodigious gifts for memorization set him apart from them through his childhood, his years as a lawyer, and his entrance into politics.

No one can transcend the limitations of their time, and Lincoln was no exception. But what emerges from Reynolds’s masterful reckoning is a man who at each stage in his life managed to arrive at a broader view of things than all but his most enlightened peers. As a politician, he moved too slowly for some and too swiftly for many, but he always pushed toward justice while keeping the whole nation in mind. Abe culminates, of course, in the Civil War, the defining test of Lincoln and his beloved country. Reynolds shows us the extraordinary range of cultural knowledge Lincoln drew from as he shaped a vision of true union, transforming, in Martin Luther King Jr.’s words, “the jangling discords of our nation into a beautiful symphony of brotherhood.”

Abraham Lincoln did not come out of nowhere. But if he was shaped by his times, he also managed at his life’s fateful hour to shape them to an extent few could have foreseen. Ultimately, this is the great drama that astonishes us still, and that Abe brings to fresh and vivid life. The measure of that life will always be part of our American education.” 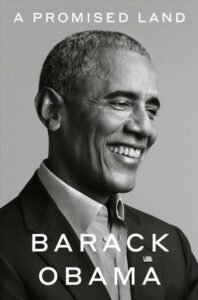 A Promised Land – Barak Obama
“In the stirring, highly anticipated first volume of his presidential memoirs, Barack Obama tells the story of his improbable odyssey from young man searching for his identity to leader of the free world, describing in strikingly personal detail both his political education and the landmark moments of the first term of his historic presidency—a time of dramatic transformation and turmoil.

Obama takes readers on a compelling journey from his earliest political aspirations to the pivotal Iowa caucus victory that demonstrated the power of grassroots activism to the watershed night of November 4, 2008, when he was elected 44th president of the United States, becoming the first African American to hold the nation’s highest office.

Reflecting on the presidency, he offers a unique and thoughtful exploration of both the awesome reach and the limits of presidential power, as well as singular insights into the dynamics of U.S. partisan politics and international diplomacy. Obama brings readers inside the Oval Office and the White House Situation Room, and to Moscow, Cairo, Beijing, and points beyond. We are privy to his thoughts as he assembles his cabinet, wrestles with a global financial crisis, takes the measure of Vladimir Putin, overcomes seemingly insurmountable odds to secure passage of the Affordable Care Act, clashes with generals about U.S. strategy in Afghanistan, tackles Wall Street reform, responds to the devastating Deepwater Horizon blowout, and authorizes Operation Neptune’s Spear, which leads to the death of Osama bin Laden.

A Promised Land is extraordinarily intimate and introspective—the story of one man’s bet with history, the faith of a community organizer tested on the world stage. Obama is candid about the balancing act of running for office as a Black American, bearing the expectations of a generation buoyed by messages of “hope and change,” and meeting the moral challenges of high-stakes decision-making. He is frank about the forces that opposed him at home and abroad, open about how living in the White House affected his wife and daughters, and unafraid to reveal self-doubt and disappointment. Yet he never wavers from his belief that inside the great, ongoing American experiment, progress is always possible.”