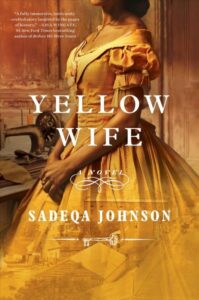 The Yellow Wife – Sedeqa Johnson
Lorraine’s thoughts: I liked it but was wishing for a little more historical information. Perhaps I didn’t care for the author’s writing style? I would like to try another of her books.
“Born on a plantation in Charles City, Virginia, Pheby Delores Brown has lived a relatively sheltered life. Shielded by her mother’s position as the estate’s medicine woman and cherished by the Master’s sister, she is set apart from the others on the plantation, belonging to neither world.

She’d been promised freedom on her eighteenth birthday, but instead of the idyllic life she imagined with her true love, Essex Henry, Pheby is forced to leave the only home she has ever known. She unexpectedly finds herself thrust into the bowels of slavery at the infamous Devil’s Half Acre, a jail in Richmond, Virginia, where the enslaved are broken, tortured, and sold every day. There, Pheby is exposed not just to her Jailer’s cruelty but also to his contradictions. To survive, Pheby will have to outwit him, and she soon faces the ultimate sacrifice.” 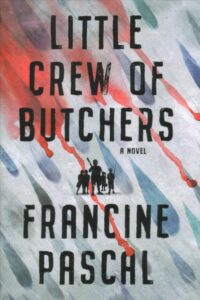 Little Crew of Butchers – Francine Pascal
Lorraine’s thoughts: Loved! Creepy horror story about a gang of misunderstood preteens torturing a stranger in town.
“Lucas Baird never got much of a break when he was a child, but by his early twenties, his good looks and easy manner allow him to skate through life without having to put in much effort. On the cusp of manhood in years yet still a boy — what Anthony Trollope called a hobbledehoy — charming Luke has enjoyed his extended adolescence of drinking and small-time cons. But when a freak accident compels him to leave LA — and leave fast — he finds himself in New York, in the seemingly idyllic Long Island beach town of Shorelane, where through a drunken mistake, he becomes trapped in a life-or-death ordeal. Luke’s only potential saviors are a group of local children, who are themselves lost and destined for paths much the same as Luke’s — if not worse — and a young woman, equally lost. For Luke to finally cross into manhood, he will have to come to terms with his own poor judgment and mortality, and find the courage to stay sane in the face of irrational actors.” 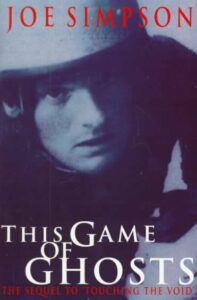 This Game of Ghosts – Joe Simpson
Lorraine’s thoughts: Loved! I love anything having to do with mountain climbing, especially Mt. Everest!
“When Simon Yates cut the rope and sent his friend plummeting to an ordeal few mountaineers can have contemplated, the outcome was totally unpredictable. That Joe Simpson survived is a revelation of the power of the human spirit to overcome fear, pain and deprivation of almost unimaginable intensity. He did not expect to live it all over again – more than once.

The first test was to write his award-winning account of the ordeal in Touching the Void. That meant dragging the terrifying experience out of the deeper shadows of his memory. Next another fall in the Himalayas crippled and almost broke him. He felt forced to test his nerve again and struggled on crutches to 20,000 feet on Pumori, near Everest. On his descent he heart that a young first-time climber had been killed by a chance rockfall. What sense could he make now of this game of ghosts that had claimed the lives of so many of his friends.

In an attempt to find catharsis for his confused emotions he wrote this extraordinary memoir, in which he recalls the signposts directing him since childhood to measure fear and embrace the unknown.”