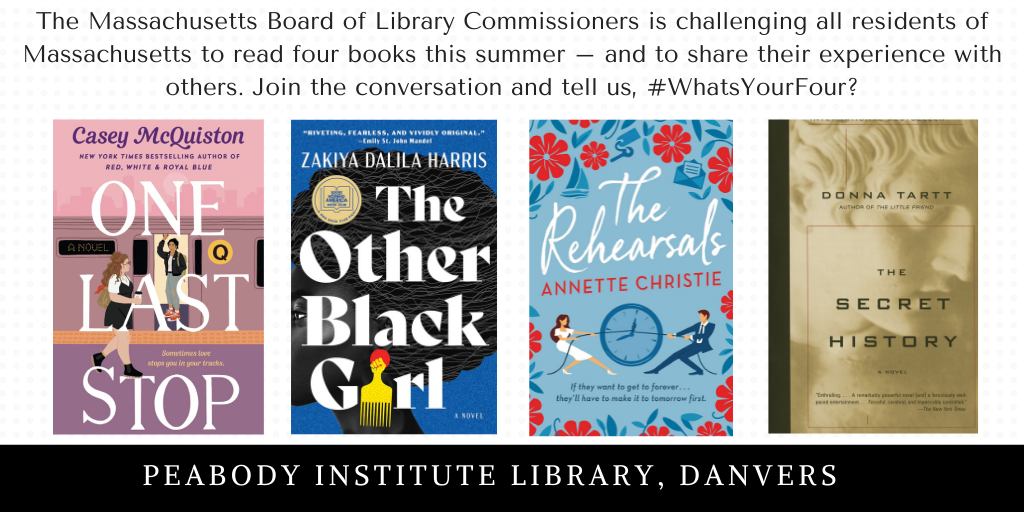 One Last Stop – Casey McQuiston
“For cynical twenty-three-year-old August, moving to New York City is supposed to prove her right: that things like magic and cinematic love stories don’t exist, and the only smart way to go through life is alone. She can’t imagine how waiting tables at a 24-hour pancake diner and moving in with too many weird roommates could possibly change that. And there’s certainly no chance of her subway commute being anything more than a daily trudge through boredom and electrical failures.

But then, there’s this gorgeous girl on the train.

Jane. Dazzling, charming, mysterious, impossible Jane. Jane with her rough edges and swoopy hair and soft smile, showing up in a leather jacket to save August’s day when she needed it most. August’s subway crush becomes the best part of her day, but pretty soon, she discovers there’s one big problem: Jane doesn’t just look like an old school punk rocker. She’s literally displaced in time from the 1970s, and August is going to have to use everything she tried to leave in her own past to help her. Maybe it’s time to start believing in some things, after all.”

The Other Black Girl – Zakiya Dalila Harris
“Twenty-six-year-old editorial assistant Nella Rogers is tired of being the only Black employee at Wagner Books. Fed up with the isolation and microaggressions, she’s thrilled when Harlem-born and bred Hazel starts working in the cubicle beside hers. They’ve only just started comparing natural hair care regimens, though, when a string of uncomfortable events elevates Hazel to Office Darling, and Nella is left in the dust.

Then the notes begin to appear on Nella’s desk: LEAVE WAGNER. NOW.

It’s hard to believe Hazel is behind these hostile messages. But as Nella starts to spiral and obsess over the sinister forces at play, she soon realizes that there’s a lot more at stake than just her career.”

The Rehearsals – Annette Christie
“Megan Givens and Tom Prescott are heading into what is supposed to be their magical wedding weekend on beautiful San Juan Island. But with two difficult families, ten years of history, and all too many secrets, things quickly go wrong. After a disastrous rehearsal dinner they vow to call the whole thing off—only to wake up the next morning stuck together in a time loop. Are they really destined to relive the worst day of their lives, over and over? And what happens if their wedding day does arrive?”

The Secret History – Donna Tartt
“Under the influence of their charismatic classics professor, a group of clever, eccentric misfits at an elite New England college discover a way of thinking and living that is a world away from the humdrum existence of their contemporaries. But when they go beyond the boundaries of normal morality their lives are changed profoundly and forever, and they discover how hard it can be to truly live and how easy it is to kill.”