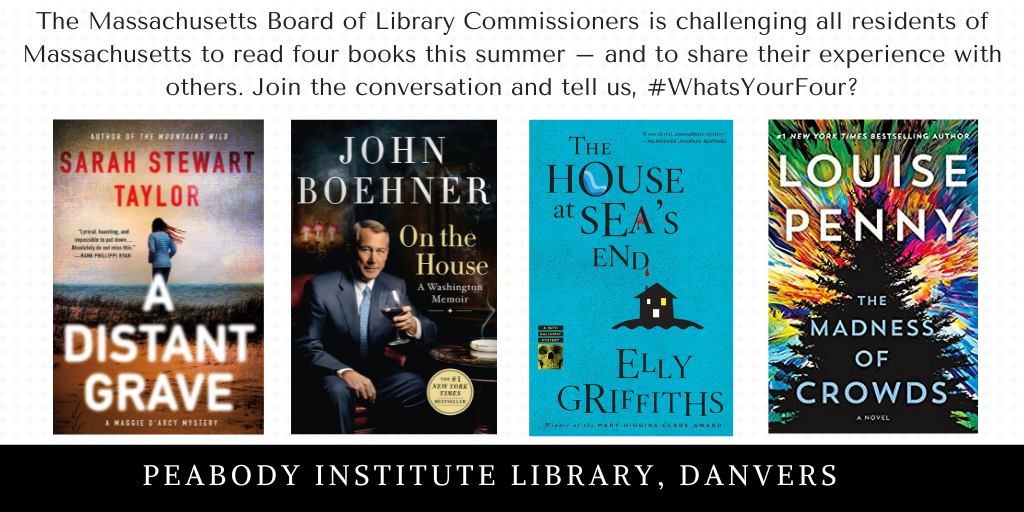 A Distant Grave – Sarah Stewart Taylor
“Long Island homicide detective Maggie D’arcy and her teenage daughter, Lilly, are still recovering from the events of last fall when a strange new case demands Maggie’s attention. The body of an unidentified Irish national turns up in a wealthy Long Island beach community and with little to go on but the scars on his back, Maggie once again teams up with Garda detectives in Ireland to find out who the man was and what he was doing on Long Island. The strands of the mystery take Maggie to a quiet village in rural County Clare that’s full of secrets and introduce her to the world of humanitarian aid workers half a world away. And as she gets closer to the truth about the murder, what she learns leads her back to her home turf and into range of a dangerous and determined killer who will do anything to keep the victim’s story hidden forever.”

On the House: A Washington Memoir – John Boehner
“John Boehner is the last of a breed. At a time when the arbiters of American culture were obsessing over organic kale, cold-pressed juice, and SoulCycle, the man who stood second in line to the presidency was unapologetically smoking Camels, quaffing a glass of red, and hitting the golf course whenever he could.

There could hardly have been a more diametrically opposed figure to represent the opposition party in President Barack Obama’s Washington. But when Boehner announced his resignation, President Obama called to tell the outgoing Speaker that he’d miss him. “Mr. President,” Boehner replied, “yes you will.” He thought of himself as a “regular guy with a big job,” and he enjoyed it.

In addition to his own stories of life in the swamp city and of his comeback after getting knocked off the leadership ladder, Boehner offers his impressions of leaders he’s met and what made them successes or failures, from Ford and Reagan to Obama, Trump, and Biden. He shares his views on how the Republican Party has become unrecognizable today; the advice–some harsh, some fatherly–he dished out to members of his own party, the opposition, the media, and others; and his often acid-tongued comments about his former colleagues. And of course he talks about golfing with five presidents.”

The House at Sea’s End – Elly Griffiths
“Just back from maternity leave, forensic archeologist Ruth is finding it hard to juggle motherhood and work when she is called in to investigate human bones that have surfaced on a remote Norfolk beach. The presence of DCI Harry Nelson, the married father of her daughter, does not help. The bones, six men with their arms bound, turn out date back to World War II, a desperate time on this stretch of coastland.

Home Guard veteran Archie Whitcliffe reveals the existence of a secret the old soldiers have vowed to protect with their lives. But then Archie is killed and a German journalist arrives, asking questions about Operation Lucifer, a plan to stop a German invasion, and a possible British war crime. What was Operation Lucifer? And who is prepared to kill to keep its secret?”

The Madness of Crowds – Louise Penny
“You’re a coward.

Time and again, as the New Year approaches, that charge is leveled against Armand Gamache.

While the residents of the Québec village of Three Pines take advantage of the deep snow to ski and toboggan, to drink hot chocolate in the bistro and share meals together, the Chief Inspector finds his holiday with his family interrupted by a simple request.

He’s asked to provide security for what promises to be a non-event. A visiting Professor of Statistics will be giving a lecture at the nearby university.

While he is perplexed as to why the head of homicide for the Sûreté du Québec would be assigned this task, it sounds easy enough. That is until Gamache starts looking into Professor Abigail Robinson and discovers an agenda so repulsive he begs the university to cancel the lecture.

They refuse, citing academic freedom, and accuse Gamache of censorship and intellectual cowardice. Before long, Professor Robinson’s views start seeping into conversations. Spreading and infecting. So that truth and fact, reality and delusion are so confused it’s near impossible to tell them apart.

Abigail Robinson promises that, if they follow her, ça va bien aller. All will be well. But not, Gamache and his team know, for everyone.

When a murder is committed it falls to Armand Gamache, his second-in-command Jean-Guy Beauvoir, and their team to investigate the crime as well as this extraordinary popular delusion.

And the madness of crowds.”