As you might expect from a librarian I am fascinated by how books are made throughout history and recently I have been reading a lot about how they were produced in the middle ages before the invention of the printing press. This is an off shoot of my last recommendation The Bookseller of Florence which led me to the works of Christopher de Hamel, a manuscript librarian a Cambridge University and who has also done work for Sotheby’s. I’ve been reading Making Medieval Manuscripts in which he goes into the nuts and bolts of how a book was constructed in the medieval period and how that changed over time. Anyone who is even a bit into crafts will find this book interesting. Almost at the same time I have been listening Meetings With Remarkable Manuscripts via Hoopla. As you meet the manuscripts you learn what medieval manuscripts can tell us about the past and our own times. Hamel is the narrator of Meetings With Remarkable Manuscripts and his obvious love of his subject really comes through. If you do listen to it, you will probably want to have the hardcopy handy as the pictures really help. In fact one of the best things about both of these books are the pictures.

Many beautiful illuminated manuscripts survive from the Middle Ages and can be seen in libraries and museums throughout Europe. But who were the skilled craftsmen who made these exquisite books? What precisely is parchment? How were medieval manuscripts designed and executed? What were the inks and pigments, and how were they applied? Examining the work of scribes, illuminators, and bookbinders, this lavishly illustrated account tells the story of manuscript production from the early Middle Ages through to the high Renaissance. Each stage of production is described in detail, from the preparation of the parchment, pens, paints, and inks to the writing of the scripts and the final decoration of the manuscript. Christopher de Hamel’s engaging text is accompanied by a glossary of key technical terms relating to manuscripts and illumination, providing an invaluable introduction for anyone interested in studying medieval manuscripts today. 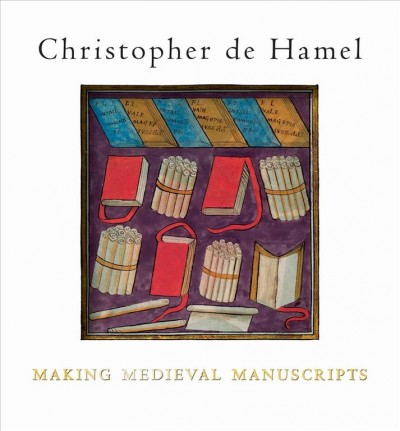 Meetings With Remarkable Manuscripts: Twelve Journeys Into the Medieval World

This is a remarkable examination of twelve illuminated manuscripts from the medieval period. Noted authority Christopher de Hamel invites the reader into intimate conversations with these texts to explore what they tell us about nearly a thousand years of medieval history – and sometimes about the modern world too.
In so doing, de Hamel introduces us to kings, queens, saints, scribes, artists, librarians, thieves, dealers, and collectors. He traces the elaborate journeys which these exceptionally precious artifacts have made through time, shows us how they have been copied, who has owned them or lusted after them (and how we can tell), how they have been embroiled in politics, how they have been regarded as objects of supreme beauty and as symbols of national identity. 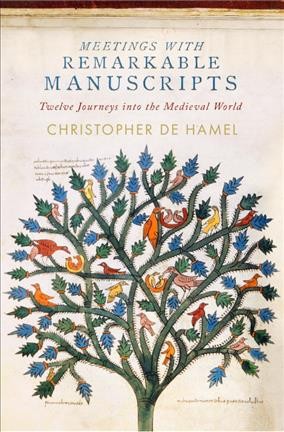