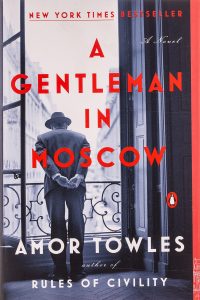 Currently immersed in A Gentleman in Moscow by Amor Towles. This has been on my To Be Read list for a long time and I’m glad I finally picked it up since historical fiction is one of my favorite genres. It follows the life of a former Count who is placed under house arrest at the Metropol hotel after the Bolsheviks look unkindly on the aristocrat in the early 1920s. Alexander oozes Cary Grant-style humor and charm as he becomes a hotel fixture and witnesses some of the most tumultuous times in Russian history over the decades. Filled with memorable characters and scenes, I’m loving every page. It is also apparently a work in progress for a television series that Kenneth Branagh is involved in creating.

(Side note: Michelle highly recommends this, too!! If you’ve already read A Gentleman in Moscow and enjoyed Towles’ writing, his new book The Lincoln Highway was released on Oct 5. Contact the library to have your name added to the hold list.)