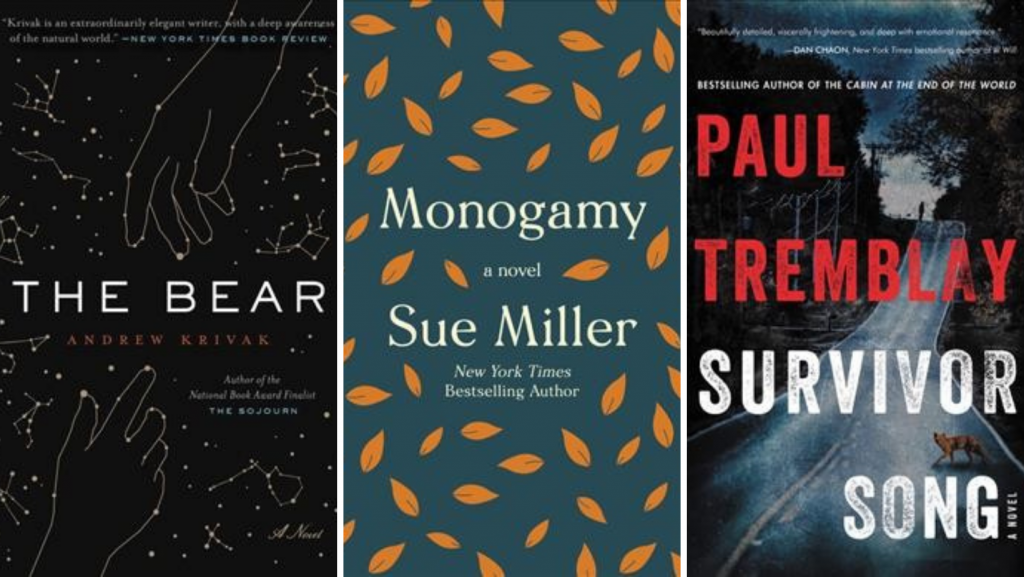 Set in a (post-apocalyptic?) future, The Bear follows an unnamed father and daughter through her childhood as he teaches her what little skills he can, “preparing her for an adulthood in harmony with nature” as the last two humans alive. The novel is slim—mostly narration of endless, monotonous tasks—and broken only by even sparser dialogue (for which Krivak omits quotation marks). The Bear might have worked better as a film a la Silence or The Fall—a stark landscape brought to life by beautiful cinematography and soaring instrumentals—but I didn’t like it as a novel at all.

A portrait of Annie and Graham’s decades-long marriage, Monogamy is also broadly about how infidelity affects a long-term relationship. It’s billed as ‘domestic fiction’—and it is—but I think that labeling novels written by women, featuring women, and concerning ‘women’s interests’ discounts the importance of using literature to explore big issues like grief, betrayal, commitment, and self-reflection. Monogamy will never be that interesting to readers who need a fast-paced plot, quippy dialogue, or simply dislike relationship-based anything—but I enjoyed the peek into other people’s lives.

Survivor Song—written before our current global pandemic—follows a very pregnant Natalie as she seeks medical care for an infected bite during a viral rabies outbreak. The omnipresent terror of something truly scary is often hard to do in print, but Tremblay unintentionally captured the fear and confusion of those first few weeks and months of our global shutdown while also including blood and gore. Will Tremblay’s other books make me as uncomfortable or present as I felt while reading Survivor Song? Maybe not. But that doesn’t mean I shouldn’t read them. My favorite kind of horror lies in metaphor anyway.