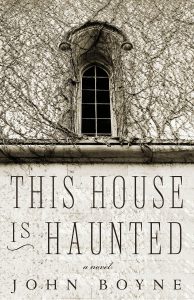 This House is Haunted by John Boyne
“This House Is Haunted is a striking homage to the classic nineteenth-century ghost story. Set in Norfolk in 1867, Eliza Caine responds to an ad for a governess position at Gaudlin Hall. When she arrives at the hall, shaken by an unsettling disturbance that occurred during her travels, she is greeted by the two children now in her care, Isabella and Eustace. There is no adult present to represent her mysterious employer, and the children offer no explanation. Later that night in her room, another terrifying experience further reinforces the sense that something is very wrong.

From the moment Eliza rises the following morning, her every step seems dogged by a malign presence that lives within Gaudlin’s walls. Eliza realizes that if she and the children are to survive its violent attentions, she must first uncover the hall’s long-buried secrets and confront the demons of its past.” 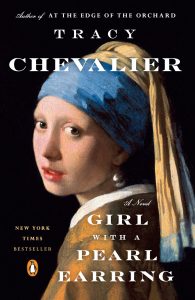 Girl with a Pearl Earring by Tracy Chevalier
“With precisely 35 canvases to his credit, the Dutch painter Johannes Vermeer represents one of the great enigmas of 17th-century art. The meager facts of his biography have been gleaned from a handful of legal documents. Yet Vermeer’s extraordinary paintings of domestic life, with their subtle play of light and texture, have come to define the Dutch golden age. His portrait of the anonymous Girl with a Pearl Earring has exerted a particular fascination for centuries—and it is this magnetic painting that lies at the heart of Tracy Chevalier’s second novel of the same title.

Girl with a Pearl Earring centers on Vermeer’s prosperous Delft household during the 1660s. When Griet, the novel’s quietly perceptive heroine, is hired as a servant, turmoil follows. First, the 16-year-old narrator becomes increasingly intimate with her master. Then Vermeer employs her as his assistant—and ultimately has Griet sit for him as a model.” 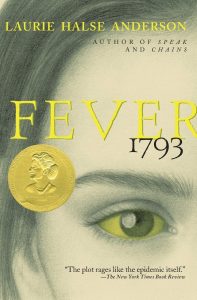 Fever 1793 by Laurie Halse Anderson
“During the summer of 1793, Mattie Cook lives above the family coffee shop with her widowed mother and grandfather. Mattie spends her days avoiding chores and making plans to turn the family business into the finest Philadelphia has ever seen. But then the fever breaks out.

Disease sweeps the streets, destroying everything in its path and turning Mattie’s world upside down. At her feverish mother’s insistence, Mattie flees the city with her grandfather. But she soon discovers that the sickness is everywhere, and Mattie must learn quickly how to survive in a city turned frantic with disease.” 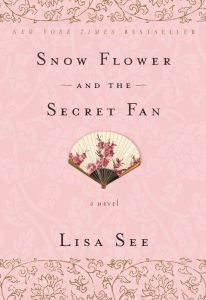 Snow Flower and the Secret Fan by Lisa See
“In nineteenth-century China, when wives and daughters were foot-bound and lived in almost total seclusion, the women in one remote Hunan county developed their own secret code for communication: nu shu (“women’s writing”). Some girls were paired with laotongs, “old sames,” in emotional matches that lasted throughout their lives. They painted letters on fans, embroidered messages on handkerchiefs, and composed stories, thereby reaching out of their isolation to share their hopes, dreams, and accomplishments.

With the arrival of a silk fan on which Snow Flower has composed for Lily a poem of introduction in nu shu, their friendship is sealed and they become “old sames” at the tender age of seven. As the years pass, through famine and rebellion, they reflect upon their arranged marriages, loneliness, and the joys and tragedies of motherhood. The two find solace, developing a bond that keeps their spirits alive. But when a misunderstanding arises, their lifelong friendship suddenly threatens to tear apart.

Snow Flower and the Secret Fan is a brilliantly realistic journey back to an era of Chinese history that is as deeply moving as it is sorrowful. With the period detail and deep resonance of Memoirs of a Geisha, this lyrical and emotionally charged novel delves into one of the most mysterious of human relationships: female friendship. ” 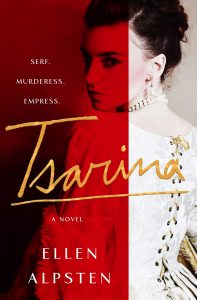 Tsarina by Ellen Alpsten
“St. Petersburg, 1725. Peter the Great lies dying in his magnificent Winter Palace. The weakness and treachery of his only son has driven his father to an appalling act of cruelty and left the empire without an heir. Russia risks falling into chaos. Into the void steps the woman who has been by his side for decades: his second wife, Catherine Alexeyevna, as ambitious, ruthless and passionate as Peter himself.

Born into devastating poverty, Catherine used her extraordinary beauty and shrewd intelligence to ingratiate herself with Peter’s powerful generals, finally seducing the Tsar himself. But even amongst the splendor and opulence of her new life―the lavish feasts, glittering jewels, and candle-lit hours in Peter’s bedchamber―she knows the peril of her position. Peter’s attentions are fickle and his rages powerful; his first wife is condemned to a prison cell, her lover impaled alive in Red Square. And now Catherine faces the ultimate test: can she keep the Tsar’s death a secret as she plays a lethal game to destroy her enemies and take the Crown for herself?

From the sensuous pleasures of a decadent aristocracy, to the incense-filled rites of the Orthodox Church and the terror of Peter’s torture chambers, the intoxicating and dangerous world of Imperial Russia is brought to vivid life. Tsarina is the story of one remarkable woman whose bid for power would transform the Russian Empire.” 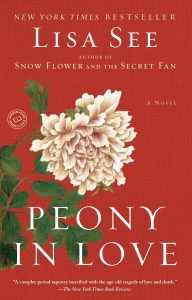 Peony in Love by Lisa See
“For young Peony, betrothed to a suitor she has never met, these lyrics from The Peony Pavilion mirror her own longings. In the garden of the Chen Family Villa, amid the scent of ginger, green tea, and jasmine, a small theatrical troupe is performing scenes from this epic opera, a live spectacle few females have ever seen. Like the heroine in the drama, Peony is the cloistered daughter of a wealthy family, trapped like a good-luck cricket in a bamboo-and-lacquer cage. Though raised to be obedient, Peony has dreams of her own.

Peony’s mother is against her daughter’s attending the production: “Unmarried girls should not be seen in public.” But Peony’s father assures his wife that proprieties will be maintained, and that the women will watch the opera from behind a screen. Yet through its cracks, Peony catches sight of an elegant, handsome man with hair as black as a cave–and is immediately overcome with emotion.

So begins Peony’s unforgettable journey of love and destiny, desire and sorrow–as Lisa See’s haunting new novel, based on actual historical events, takes readers back to seventeenth-century China, after the Manchus seize power and the Ming dynasty is crushed.

Steeped in traditions and ritual, this story brings to life another time and place–even the intricate realm of the afterworld, with its protocols, pathways, and stages of existence, a vividly imagined place where one’s soul is divided into three, ancestors offer guidance, misdeeds are punished, and hungry ghosts wander the earth. Immersed in the richness and magic of the Chinese vision of the afterlife, transcending even death, Peony in Love explores, beautifully, the many manifestations of love. Ultimately, Lisa See’s new novel addresses universal themes: the bonds of friendship, the power of words, and the age-old desire of women to be heard.”