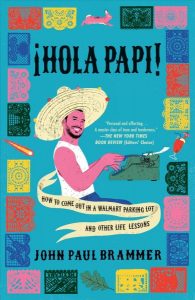 Hola Papi!: How to Come Out In a Walmart Parking Lot and Other Life Lessons by John Paul Brammer
The first time someone called John Paul (JP) Brammer “Papi” was on the popular gay hookup app Grindr. At first, it was flattering, but then it happened again and again…and again, leaving JP wondering: Who the hell is Papi? What started as a racialized moniker given to him on a hookup app soon became the inspiration for his now wildly popular advice column “¡Hola Papi!,” launching his career as the Cheryl Strayed for young queer people everywhere—and some straight people too. JP had his doubts at first—what advice could he really offer while he himself stumbled through his early 20s? Sometimes the best advice to dole outcomes from looking within, which is what JP has done in his column and book—and readers have flocked to him for honest, heartfelt wisdom, and of course, a few laughs. Here, JP shares his story of growing up biracial and in the closet in America’s heartland, while attempting to answer some of life’s toughest questions: How do I let go of the past? How do I become the person I want to be? Is there such a thing as being too gay? Should I hook up with my grade school bully now that he’s out of the closet? Questions we’ve all asked ourselves, surely. With wit and wisdom in equal measure, ¡Hola Papi! is for anyone—gay, straight, and everything in between—who has ever taken stock of their unique place in the world, offering considered advice, intelligent discourse, and fits of laughter along the way.

Vessel: A Memoir by Chongda Cai 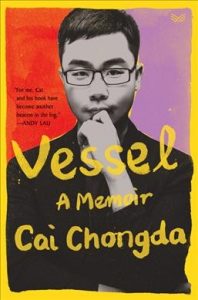 An unprecedented and heartfelt memoir that illuminates the lives of rural Chinese workers, offering a portrait of generational strife, family, love, and loss that crosses cultures and time. Cai Chongda spent his childhood in a rural fishing village in Fujian province. When his father-a former communist gang leader turned gas station owner-has a stroke that partially paralyzes him, his responsibilities fall to Cai, his only son. Assuming his new role as head of the family, Cai toils alongside his mother and older sister to pay the medical bills that have become a part of a rapidly changing Chinese society. As Cai works his way through university and moves to Beijing, eventually becoming a director of GQ China, he finds his life increasingly at odds with the family he supports but has left behind. Like The Glass Castle and Hillbilly Elegy, Vessel neither romanticizes nor condemns the people and circumstances that shaped a young man’s life, but instead offers a way forward, revealing how tradition can enrich modern life

On Earth We Are Briefly Gorgeous by Ocean Vuong
On Earth We’re Briefly Gorgeous is a letter from a son to a mother who cannot read. Written when the speaker, Little Dog, is in his late twenties, the letter unearths a family’s history that began before he was born–a history whose epicenter is rooted in Vietnam–and serves as a doorway into parts of his life his mother has never known, all of it leading to an unforgettable revelation. At once a witness to the fraught yet undeniable love between a single mother and her son, it is also a brutally honest exploration of race, class, and masculinity 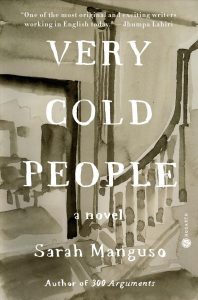 Growing up in the frozen, snow-padded town of Waitsfield, Massachusetts, Ruthie, dealing with shame handed down from her immigrant ancestors and her indomitable mother, and violence endured by her high school friends, wonders if she’ll ever get out of this town alive.

Woke Racism: How a New Religion has Betrayed Black America by John McWhorter

Americans of good will on both the left and the right are secretly asking themselves the same question: how has the conversation on race in America gone so crazy? We’re told read books and listen to music by people of color but that wearing certain clothes is ‘appropriation.’ We hear that being white automatically gives you privilege and that being Black makes you a victim. We want to speak up but fear we’ll be seen as unwoke, or worse, labeled a racist. According to John McWhorter, the problem is that a well-meaning but pernicious form of antiracism has become, not a progressive ideology, but a religion—and one that’s illogical, unreachable, and unintentionally neoracist. In Woke Racism, McWhorter reveals the workings of this new religion, from the original sin of ‘white privilege’ and the weaponization of cancel culture to ban heretics, to the evangelical fervor of the ‘woke mob.’ He shows how this religion that claims to ‘dismantle racist structures’ is actually harming his fellow Black Americans by infantilizing Black people, setting Black students up for failure, and passing policies that disproportionately damage Black communities. The new religion might be called ‘antiracism,’ but it features a racial essentialism that’s barely distinguishable from racist arguments of the past. 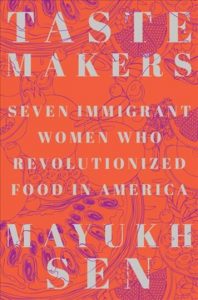 America’s modern culinary history told through the lives of seven pathbreaking chefs and food writers. Who’s really behind America’s appetite for foods from around the globe? This group biography from an electric new voice in food writing honors seven extraordinary women, all immigrants, who left an indelible mark on the way Americans eat today. Taste Makers stretches from World War II to the present, with absorbing and deeply researched portraits of figures including Mexican-born Elena Zelayeta, a blind chef; Marcella Hazan, the deity of Italian cuisine; and Norma Shirley, a champion of Jamaican dishes. In imaginative, lively prose, Mayukh Sen-a queer, brown child of immigrants-reconstructs the lives of these women in vivid and empathetic detail, daring to ask why some were famous in their own time, but not in ours, and why others shine brightly even today. Weaving together histories of food, immigration, and gender, Taste Makers will challenge the way readers look at what’s on their plate-and the women whose labor, overlooked for so long, makes those meals possible