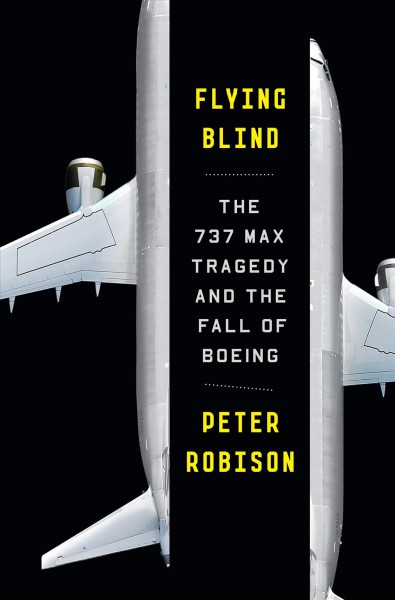 Flying Blind: The 737 MAX Tragedy and the Tall of Boeing by Peter Robison

A fast-paced look at the corporate dysfunction–the ruthless cost-cutting, toxic workplaces, and cutthroat management–that contributed to one of the worst tragedies in modern aviation Boeing is a century-old titan of American industry. The largest exporter in the US, it played a central role in the early days of commercial flight, World War II bombing missions, and moon landings. It remains a linchpin in the awesome routine of air travel today. But the two crashes of its 737 MAX 8, in 2018 and 2019, exposed a shocking pattern of malfeasance, leading to the biggest crisis in the company’s history. How did things go so horribly wrong at Boeing? Flying Blind is the definitive exposé of a corporate scandal that has transfixed the world. It reveals how a broken corporate culture paved the way for disaster, losses that were altogether avoidable. Drawing from aviation insiders, as well as exclusive interviews with senior Boeing staff, past and present, it shows how in its race to beat Airbus, Boeing skimped on testing, outsourced critical software to unreliable third-parties, and convinced regulators to put planes into service without properly equipping pilots to fly them. In the chill that it cast over its workplace, it offers a parable for a corporate America that puts the interests of shareholders over customers, employees, and communities. This is a searing account of how a once-iconic company fell prey to a win-at-all-costs mentality, destabilizing an industry and needlessly sacrificing 350 lives