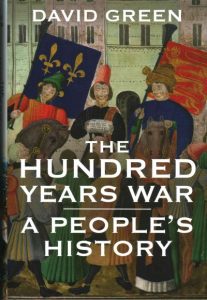 David Green’s The Hudrend Years War is not a standard chronological history of the Hundred Years War. In fact if you need a history that follows the course of the war this probably isn’t the book for you. What this book does really well is cataloging the ways that a war that lasts for several generations changes society as a whole.

Green highlights everything from how the economics of France and England changed to how prisoners were treated from the early 14th century to the mid 15th century. At the same time he demonstrates these changes with the best narrative history. There are stories of English soldiers who merry French women in occupied France, who when the English withdraw, choose to stay behind in France. Or all the problems you can get into while trying to get a ransom for a knight you captured in a battle.

The larger argument though is that the Hundred Years War accelerated the process that lead to the England and France of today. When the war started French was the language of choice by the upper classes of both nations. By the end of the war is was increasing hard to find Englishmen of any station who could speak French. Most ironically, a war that was supposed to be about the English crown’s right to rule France, ended with both nations taking on national identities that would set the stage for Anglo French animosity and opposition into the later 19th century.

If you liked A Distant Mirror: The Calamitous 14th Century by Barbara W. Tuchman but thought “I wish there was more stuff on the Hundred Years War” this is the book for you.