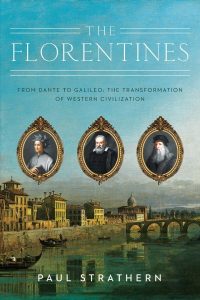 The Florentines: From Dante to Galileo the Transformation of Western Civilization by Paul Strathern
Between the birth of Dante in 1265 and the death of Galileo in 1642, something happened that transformed the entire culture of western civilization. Painting, sculpture, and architecture would all visibly change in such a striking fashion that there could be no going back on what had taken place. Likewise, the thought and self-conception of humanity would take on a completely new aspect. Sciences would be born—or emerge in an entirely new guise.

The ideas that broke this mold began, and continued to flourish, in the city of Florence in northern central Italy. These ideas, which placed an increasing emphasis on the development of our common humanity—rather than other-worldly spirituality—coalesced in what came to be known as humanism. This philosophy and its new ideas would eventually spread across Italy, yet wherever they took hold they would retain an element essential to their origin. And as they spread further across Europe, this element would remain. [goodreads]

Princes of the Renaissance: The Hidden Power Behind an Artistic Revolution by Mary Hollingsworth 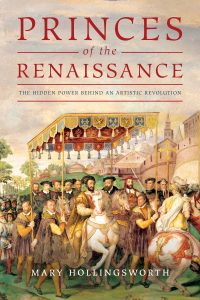 Princes of the Renaissance charts these developments in a sequence of eleven chapters, each of which is devoted to two or three princely characters with a cast of minor ones—from Federigo da Montefeltro, Duke of Urbino, to Cosimo I de’ Medici, Duke of Florence, and from Isabella d’Este of Mantua to Lucrezia Borgia. Many of these princes were related by blood or marriage, creating a web of alliances that held Renaissance society together—but whose tensions could spark feuds that threatened to tear it apart.

A vivid depiction of the lives and times of the aristocratic elite whose patronage created the art and architecture of the Renaissance, Princes of the Renaissance is a narrative that is as rigorous and definitively researched as it is accessible and entertaining. Perhaps most importantly, Mary Hollingsworth sets the aesthetic achievements of these aristocratic patrons in the context of the volatile, ever-shifting politics of an age of change and innovation. [goodreads] 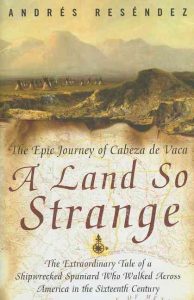 A Land so Strange: The Epic Journey of Cabeza de Vaca the Extraordinary Tale of a Shipwrecked Spaniard Who Walked Across America in the Sixteenth Century by Andres Resendez
The gripping story of a doomed mission to North America — and the four survivors who journeyed for a decade across the new world just discovered by Christopher Columbus.
In 1528, a mission set out from Spain to colonize Florida. But the expedition went horribly wrong: Delayed by a hurricane, knocked off course by a colossal error of navigation, and ultimately doomed by a disastrous decision to separate the men from their ships, the mission quickly became a desperate journey of survival.

Of the four hundred men who had embarked on the voyage, only four survived — three Spaniards and an African slave. This tiny band endured a horrific march through Florida, a harrowing raft passage across the Louisiana coast, and years of enslavement in the American Southwest. They journeyed for almost ten years in search of the Pacific Ocean that would guide them home, and they were forever changed by their experience. The men lived with a variety of nomadic Indians and learned several indigenous languages. They saw lands, peoples, plants, and animals that no outsider had ever before seen. [goodreads]

Forgotten Peoples of the Ancient World by Philip Matyszak 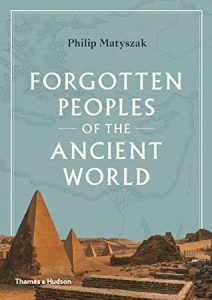 The ancient world of the Mediterranean and the Near East saw the birth and collapse of great civilizations. While several of these are well known, for all those that have been recorded, many have been unjustly forgotten. Our history is overflowing with different cultures that have all evolved over time, sometimes dissolving or reforming, though ultimately shaping the way we continue to live. But for every culture that has been remembered, what have we forgotten?

This thorough guide explores those civilizations that have faded from the pages of our textbooks but played a significant role in the development of modern society. Forgotten Peoples of the Ancient World covers the Hyksos to the Hephthalites and everyone in between, providing a unique overview of humanity’s history from approximately 3000 BCE–550 CE. A wide range of illustrated artifacts and artworks, as well as specially drawn maps, help to tell the stories of forty lost peoples and allow readers to take a direct look into the past. Each entry exposes a diverse culture, highlighting their important contributions and committing their achievements to paper. [goodreads]