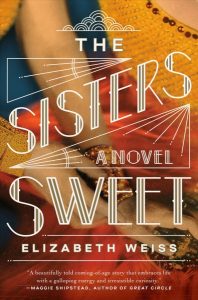 The Sisters Sweet by Elizabeth Weiss.

The Sisters Sweet is the debut novel of author Elizabeth Weiss. The story is set in Chicago in the 1920s and 1930s, and narrated by Harriet. Harriet and her twin sister Josie are the daughters of Maud and Lenny. Maude is a former Vaudeville performer, whose rise to fame was cut short when she is injured on stage. Lenny was a costume- and set-designer who turns to drinking when his career also comes to a halt. Money is tight, and Lenny is not ready to give up his dreams of stardom when he has the idea of putting Harriet and Josie onstage. Lenny creates a costume that the girls wear together, pretending to be conjoined twins as they sing and dance.

For the next ten years, the girls travel and perform their act. Josie has more natural talent, but Harriet truly loves performing with her sister. Eventually Josie rebels, and Harriet is left trying to support her small, broken family. Harriet struggles to hold her family together and works hard to become the perfect daughter. As Harriet grows into an adult, she is torn between being loyal to her parents and becoming loyal to the person she is becoming.

The novel takes side trips into the past, telling the stories of Maud and Lenny. These chapters are important to the story, but are a little confusing to understand. Other than that and a few unrealistic details here and there, this book is a fantastic read. The strength of family ties is tested to its limit, and the struggle between what we owe our family members and what we owe ourselves is universal and relatable.