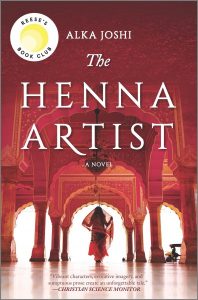 The Henna Artist by Alka Joshi, is the first book in the Jaipur Trilogy, and is currently being adapted for a TV series. The novel tells the story of Lakshmi, who escaped an abusive marriage at age seventeen and fled to the city of Jaipur. She establishes herself as a henna artist to the women of the upper class, and uses the knowledge that her mother-in-law taught her about herbal medicine and remedies to help women of all classes when they don’t have anyone else they can turn to.

Lakshmi’s clients trust her with their secrets, but Lakshmi is always careful to keep her own secrets hidden, in order to pursue her dream of living a life in which she can support herself fully and not have to rely on anyone else. One day many years later, Lakshmi’s carefully constructed life is turned upside down when her husband finds her, bringing with him Lakshmi’s younger sister, a 13-year old girl born after Lakshmi fled to Jaipur, and whom Lakshmi never knew existed.

The novel takes place in the 1950s, shortly after India won independence from the British. Lakshmi’s Jaipur is a city that is exploring its new freedom, but not all of the citizens have equal opportunities; the lower castes and women are still struggling against the political, economic and social barriers of the times. Lakshmi feels guilty about the shame she brought to her family when fled her abusive marriage, and knows that Radha, her newly-discovered sister, was also affected by her choices. Lakshmi takes on the responsibility of raising Radha but the sisters’ relationship does not follow a smooth path.

As Lakshmi works and learns to take care of her sister, young and naive Radha is struggling to adapt to life in a new city, for which she is completely unprepared. Lakshmi and Radha’s relationship eventually reaches a breaking point, and they are both forced to reevaluate their ideas of loyalty, responsibility, family, and obligation.They question what it means to be free, and the relative value of tradition and society’s expectations. Their story is ultimately about hope and healing, and the power to choose the people who support you to become your family.