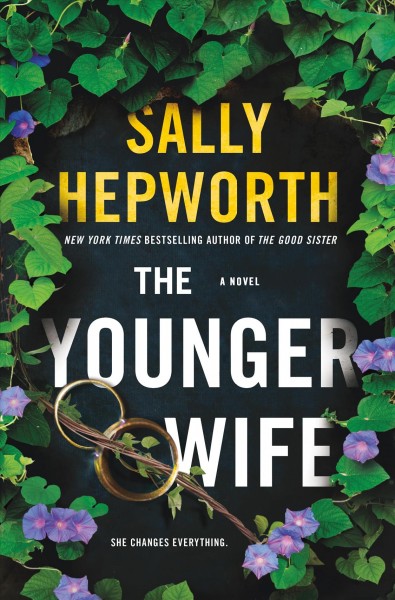 Sally Hepworth’s latest novel, The Younger Wife, is an engaging domestic suspense story that will appeal to everyone who loves Sally’s writing as much as I do. The book begins at the wedding of Stephen Aston and Heather Wisher, and the narrator is an unnamed wedding guest. Stephen’s adult daughters Tully and Rachel are bridesmaids, and Stephen’s ex-wife Pamela is in attendance. We learn that while the family is coping with Pamela’s diagnosis of early-onset Alzheimers, Stephen surprises them with the announcement of his engagement to Heather, an interior designer hired to redesign his and Pamela’s home, who is younger than both Tully and Rachel.

Tully has always struggled with anxiety, and is now watching her younger son deal with similar feelings. Tully is reeling from her husband’s recent financial bombshell, and is not ready to share this news with her sister or father. We learn that Tully’s method of coping is a secret that she has battled for years, one that she has not shared with even her husband and threatens to rock her unsteady boat even further.

Tully’s sister Rachel is a curvy, gorgeous baker and copes with her demons by eating her feelings. Rachel’s world is rocked by a handsome new assistant who challenges her status quo, and who offers unwavering support as Rachel starts to question some of the seemingly-offhand comments that her mother has been making about Stephen, Rachel and Tully’s dad. Rachel makes a shocking discovery in a simple household item of her mom’s, and Rachel is pushed to learn more about her family’s past.

The sisters are not the only ones with secrets that they hope to keep to themselves. Stephen’s young bride, Heather, is determined to keep some truths about her own family hidden. As Heather and Stephen’s wedding day draws near, Heather is forced to question what dark secrets her new husband might be hiding, and she begins to question her own sanity once she moves in with Stephen.

This novel examines toxic relationships and the damaging, lingering effects that reverberate even when we feel that we have overcome them. Unhappy families is a theme that runs through this book, and the characters struggle to put pieces of an uncomfortable puzzle together. The support that the sisters have in each other, as well as from their significant others, is heartwarming and rings true. I have been waiting for this book anxiously and it did not disappoint. If you are a fan of Liane Moriarty and Jane Harper’s books and haven’t tried one of Sally Hepworth’s books, give this one a try!