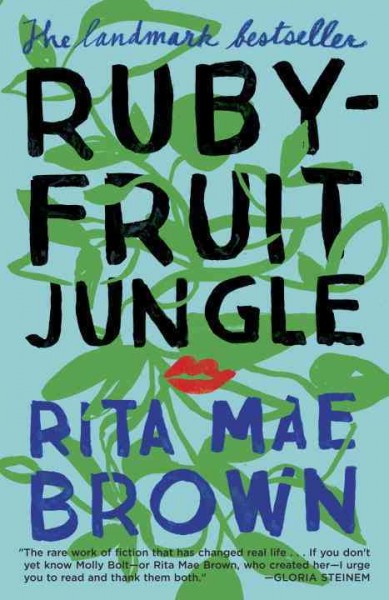 When I saw the new CD audiobook of Rubyfruit Jungle by Rita Mae Brown hit our shelves, I figured that was my sign to revisit the ageless classic. And I was right! Our shelves are lined with her cozy mysteries, but this 1970s coming of age novel has a special place in my heart. Being a story that means a lot to me, picking up an audio version after having only read the print was dangerous, but narrator Anna Paquin flawlessly brings main character Molly to life with a slight, yet non-distracting southern drawl and a consistently expressive voice. Paquin’s narration makes sure Molly’s humor and wit shines through in this recording. The story follows young Molly Bolt from her impoverished childhood in Pennsylvania to her socially bold and sexually experimental adolescence in Florida. In her young adulthood, she hitchhikes away to New York City, running toward her lifelong dream of film directing, before coming back home. While the author dislikes the way the novel is commonly labeled as a lesbian novel, it does a great job of representing intricate, complex, and beautiful queer and lesbian communities of the 1960s and 1970. Still, at its core, the book is about being yourself no matter what, a message that anybody in any time period can relate to. Molly faces teachers, friends, classmates, parents, cousins, lovers, and strangers who tell her what she should and should not do, who she should and should not be, and she never listens. Molly Bolt is such a memorable and lovable character, despite her flaws, because of her insistence on living true to herself. She refuses to let anybody else define her. At one point, after discussing whether or not she wants to get married, Molly thinks to herself, “I wanted to go my own way. That’s all I think I ever wanted, to go my own way and maybe find some love here and there.” And that’s what Molly does, she makes her own way, and she finds some love. Filled with both wit and sentiment, revisiting this book through this new CD audiobook was an absolute pleasure. (Several scenes were a bit steamier than I remembered, so this is my warning in advance if you listen to your audiobooks with a passenger in the car).