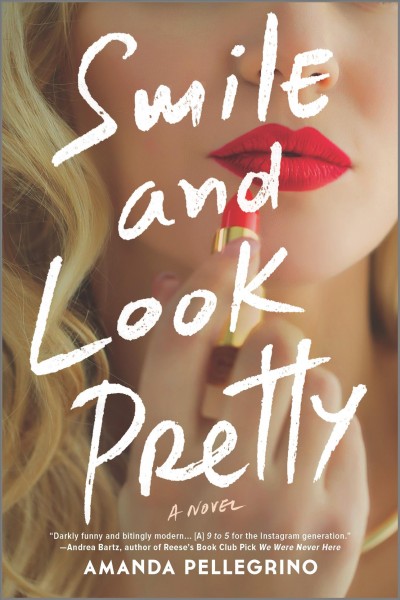 Amanda Pellegrino’s novel Smile and Look Pretty exposes the precariousness of industries which rely on the exploitation of assistants to maintain status quo. Cate, Lauren, Max and Olivia are four close friends who are all assistants to powerful figures in various entertainment industries. These twenty-something women all had big dreams when starting their careers, and expected to put time in and pay their dues before they were promoted to their dream jobs where they could have an impact on the world, and make changes.

As the first year turns into years two and three, the promotions are still out of reach, and their bosses’ promises of initiating connections, bigger assignments, facilitating meetings are clearly empty promises. These assistants are still running themselves ragged to please their bosses, determined to fulfill every demand and request, no matter how unreasonable or unfair. They are told to “look presentable,” to smile, to be sweet and docile, and in time, they will be rewarded for their patience and dedication. As  Cate, Lauren, Max and Olivia meet weekly to vent about their jobs and the abuses that they suffer, it occurs to them that nothing is going to change for them unless they make the change. They start a blog, called Twentysomething, where they anonymously write about their worst experiences at work, including  the toxic environments, sexual misconduct, humiliation, etc.

The women are shocked when the blog goes viral, and increasingly anxious about their identities being discovered. Other women start sending in stories of their own experiences, and the industry executives are forced to take notice. What will happen when women stop accepting immoral behaviors from their employers? At what point will women stand up for themselves and for others in the same position?  The depth of the misconduct and the effort to cover it up might not surprise industry leaders, but they certainly want it kept quiet. As Twentysomething gets flooded with submissions, executives are  determined to uncover the identities of the blog’s creators, and put a stop to the stories and revelations.

The only thing I struggled with while reading this book was keeping all the characters straight. The chapters are narrated by the four friends, each working in a different industry and I was constantly trying to remember who was whose executive producer, editor, boyfriend, assistant, etc. Other than that, it is a timely story that will have you rooting for the collective power of women who are just realizing how much strength they have when they work together to fight for change.