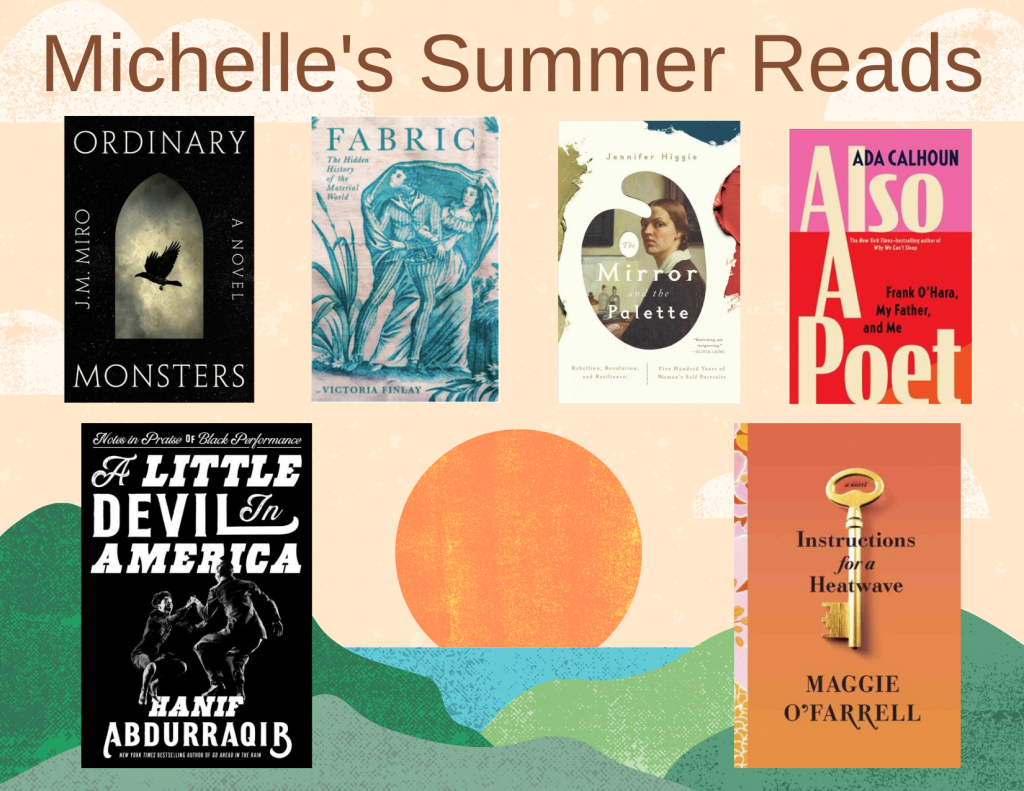 Ordinary Monsters by J. M. Miro
Sixteen-year-old Charlie Ovid, despite a lifetime of brutality, doesn’t have a scar on him. His body heals itself, whether he wants it to or not. Marlowe, a foundling from a railway freight car, shines with a strange bluish light. He can melt or mend flesh. When two grizzled detectives are recruited to escort them north to safety, they are forced to confront the nature of difference, and belonging, and the shadowy edges of the monstrous. [goodreads]

Fabric: The Hidden History of the Material World by Victoria Finlay
From our earliest ancestors to babies born today, fabric is a necessary part of our everyday lives, but it’s also an opportunity for creativity, symbolism, culture and connection. Travelling across the world and bringing history to life, bestselling author Victoria Finlay investigates how and why people have made and used cloth. [goodreads]
Instructions for a Heatwave by Maggie O’Farrell
When a recently retired family patriarch clears out his bank account and disappears during a sweltering summer in 1976, his three children converge on their mother’s home for the first time in years and track clues to an ancestral village in Ireland, where they uncover illuminating family secrets.
A Little Devil in America: Notes in Praise of Black Performance by Hanif Abdurraqib
A Little Devil in America is an urgent project that unravels all modes and methods of black performance, in this moment when black performers are coming to terms with their value, reception, and immense impact on America. With sharp insight, humor, and heart, Abdurraqib examines how black performance happens in specific moments in time and space–midcentury Paris, the moon, or a cramped living room in Columbus, Ohio. At the outset of this project, Abdurraqib became fascinated with clips of black minstrel entertainers like William Henry Lane, better known as Master Juba. Knowing there was something more complicated and deep-seated in the history and legacy of minstrelsy, Abdurraqib uncovered questions and tensions that help to reveal how black performance pervades all areas of American society. Abdurraqib’s prose is entrancing and fluid as he leads us along the links in his remarkable trains of thought. A Little Devil in America considers, critques, and praises performance in music, sports, writing, comedy, grief, games, and love
Also a Poet: Frank O’Hara, My Father, and Me by Ada Calhoun
When Ada Calhoun stumbled upon old cassette tapes of interviews her father, celebrated art critic Peter Schjeldahl, had conducted for his never-completed biography of poet Frank O’Hara, she set out to finish the book her father had started forty years earlier. [goodreads]
The Mirror and the Palette: Rebellion, Revolution, and Resilience by Jennifer Higgie
Her story weaves in and out of time and place. She’s Frida Kahlo, Loïs Mailou Jones and Amrita Sher-Gil en route to Mexico City, Paris or Bombay. She’s Suzanne Valadon and Gwen John, craving city lights, the sea and solitude; she’s Artemisia Gentileschi striding through the streets of Naples and Paula Modersohn-Becker in Worpswede. She’s haunting museums in her paint-stained dress, scrutinising how El Greco or Titian or Van Dyck or Cézanne solved the problems that she too is facing. She’s railing against her corsets, her chaperones, her husband and her brothers; she’s hammering on doors, dreaming in her bedroom, working day and night in her studio. Despite the immense hurdles that have been placed in her way, she sits at her easel, picks up a mirror and paints a self-portrait because, as a subject, she is always available. Until the twentieth century, art history was, in the main, written by white men who tended to write about other white men. The idea that women in the West have always made art was rarely cited as a possibility. Yet they have – and, of course, continue to do so – often against tremendous odds, from laws and religion to the pressures of family and public disapproval. In The Mirror and the Palette, Jennifer Higgie introduces us to a cross-section of women artists who embody the fact that there is more than one way to understand our planet, more than one way to live in it and more than one way to make art about it. Spanning 500 years, biography and cultural history intertwine in a narrative packed with tales of rebellion, adventure, revolution, travel and tragedy enacted by women who turned their back on convention and lived lives of great resilience, creativity and bravery