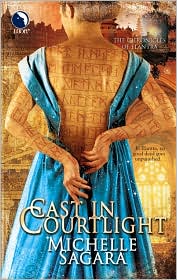 In Elantra, a job well done is rewarded with a more dangerous task. So after defeating a dark evil, Kaylin Neya goes before the Barrani High Court, where a misspoken word brings sure death. Kaylin’s never been known for her grace or manners, but the High Lord’s heir is suspiciously ill, and Kaylin’s healing magic is the only shot at saving him—if she can dodge the traps laid for her.…

Remember how much I enjoyed the first book in the Chronicles of Elantra series? Well, I liked the second book even more.

Political intrigue steps up in Cast in Courtlight and what’s better, it’s Barrani politics. That may not mean a lot if you haven’t read the first book, but trust me, once you do you’ll understand. Because it’s fascinating. The Barrani culture that Sagara has cultivated in this series is intriguing and, man, the obstacles that the Barrani court threw in Kaylin’s path really moved the story along at a fast clip. I couldn’t stop turning the pages. This installment in the series also introduced a few new characters that were compelling, characters that I absolutely want more of.

Next up is Cast in Secret and I can’t wait to dig in!