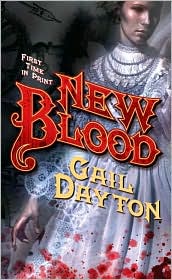 “In 1636, the last blood sorceress was burned at the stake. More than two hundred years later, her blood servant Jax has found her successor. Amanusa at first turns down the opportunity to learn what she perceives as an evil art. But she craves justice, and innocent blood cries out for justice.

When Amanusa looses magic on those who’ve harmed her, she must flee for her life across a devastated Europe with Jax, who is inescapably bound to her by blood and magic. Their journey takes them through zones where everything—including magic—has died, zones populated with strange creatures cobbled together of things left behind by the dead.

Needing each other for their very survival, Amanusa and Jax grow ever closer on their journey to discover answers – about magic, blood sorcery, the dead zones, and even love.”

New Blood is a wonderful novel filled with sympathetic, three dimensional characters, a fresh magic system and world-building, and a plot that engages from the first page to the last. Also, the setting (Transylvania and Paris) and the time period (the early 1630’s) serve as an evocative backdrop that enhances the novel beautifully. Fans of dark fantasy, steampunk, and even romance of the paranormal slant will likely devour this new title from Gail Dayton.