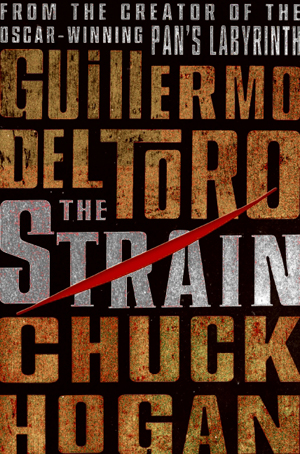 “They have always been here. Vampires. In secret and in darkness. Waiting. Now their time has come.

In one week, Manhattan will be gone. In one month, the country.

I have taken a long hard look in the mirror and come to the realization that I am Dracula snob. With few exceptions (earlier vampire stories by J. Sheridan Le Fanu and more recently Colleen Gleason’s delightful 5 book Gardella Vampire Chronicles series) I stay away from vampire fiction. I grew up enthralled with Bram Stoker’s tale of righteous individuals banding together to rid the world of a great and terrible evil. It is a book that I have read or listened to on audio many, many times over the years and with Dracula as my own personal standard, I rarely feel like any book containing vampires can measure up. So there you have it, my admission of guilt. My confession.

Earlier this year I became aware of the fact that Guillermo del Toro, a favorite writer/director, was co-writing a book with Chuck Hogan entitled The Strain. I knew nothing about it, assumed it would be about something dark, and rushed off to add my name to the library queue. When it arrived a few weeks ago I was very excited. Until I arrived home, that is, and opened it up to find that it was a contemporary story featuring, of all things, vampires. Ugh. Even the most ardent vampire lover among us has to admit that the rise in popularity of Urban Fantasy/Horror and the success of the Twilight series have given us a glut of vampire stories, on film, on the television, and on the shelves of your friendly neighborhood bookstore and library. One would think that the vampire genre has been bled dry, pardon the pun. While my first urge was to make the sign of the cross and fling the book far away from me, this was Guillermo del Toro! The man who brought us Pan’s Labyrinth. The man who was able to translate the spirit of Mike Mignola’s Hellboy series onto the big screen. The man who is currently at the helm of the beloved J.R.R. Tolkien story, The Hobbit.

I decided to read the first chapter.

And that is all it took. The Strain sunk its teeth right into me and never let up until the final page was turned.

“What was so special about that first chapter?”, you might ask? To be honest, the first chapter felt like Dracula! What I mean by that is that is was set in an earlier time period (this time during the second World War) and it was a chapter in which an old woman told a story to her grandson. A story that was so deliciously creepy that I immediately turned around and read the chapter aloud to my wife and daughter, giving them shivers up their spines. It sets up one of the main characters in this first of a trilogy of novels, Abraham Setrakian, and does so in a way that meant that there was no way I was going to stop reading this book until I found out just what happened to him.

What transpires after this opening chapter is a story of vampires as plague, a mysterious flight into New York City, and a small group of characters who are drawn together into the kind of nightmare that they would never have imagined in their wildest dreams.

By and large the novel centers around Dr. Ephraim Goodweather, a high ranking member of the CDC (Centers for Disease Control). When a plane lands and immediately shuts down, his team is one of many called in to investigate. As the plane is opened and every passenger is found inexplicably dead, it is assumed that the cause is biological in some way and Eph’s team becomes the focus of the story that unravels. Any good story needs one or more characters that you, the reader, can care about and can relate to. Ephraim is one of those characters. His portrayal as a caring father is one of the many things that gives his character depth and makes him easy for the reader to bond with. In addition to Ephraim Goodweather and Abraham Setrakian, there are divergent story lines with characters that are slowly but surely drawn deeper into the terror that unfolds.

And terror there is. I am not a fan of the vampire with a heart of gold trend. I prefer any vampire story to personify them as the epitome of true evil. The Strain does that and does it very well. Like Dracula, the novel pits two groups against one another. This is a battle for survival, it is truly good versus evil. Without sinking into gory descriptions simply for shock value, it does portray some very chilling moments as this plague spreads across the city. And I must say it is also a very unique take on vampires. Trust me, you are not going to find anyone tempted to have a romantic relationship with these creatures!

It is impossible for me to guess how much of a hand each author had in the construction of the book, but it was obvious to me that del Toro’s skill as a director influenced the construction of a story that very easily played out in my mind as if I was watching a film. As such I found it to be delightfully suspenseful.

If you are the kind of person who snatches up every bit of vampire fiction you can lay your hands on, I do not have to convince you that this is a worthwhile edition to the many volumes of vampire lore. If however, like me, you shy away from this kind of fiction because you feel there is just too much of it about, let me assure you that The Strain is one book worth adding to your reading list. It is the first of a trilogy that I believe is already completed. Books two and three will be released in 2010 and 2011 respectively. The story is broken up into bite-sized sections (again, sorry…I have a hard time resisting vampire puns) that allow for quick snatches of reading and yet each section flows together so well that it is not hard to sit down and get engrossed in this rather chilling tale. The story also drifts back into the past of Abraham Setrakian on occasion, which injects the story with the rich, old-world feel that the first chapter so skillfully demonstrates.

For those of you still on the fence about this one, I encourage you to take a moment to visit this link. It allows you to read the first chapter, in pdf format, as well as a teaser of the beginning of the contemporary storyline.

As we enter into the season of shorter days, autumn breezes, and hot cider on a cool evening, it is comforting to know that one need not always have to dip into the classics to find a good story that will make you want to read with all the lights on.