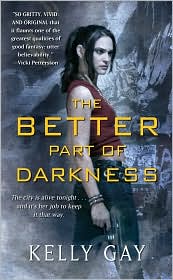 Charlie Madigan is a single mom raising her daughter in post-Revelation Atlanta. She’s also an Integration Task Force agent for the Atlanta police, a position she takes seriously and, along with her partner, Hank, it’s a job she does well.

When a new addictive substance, a drug known as ash, hits her streets, Charlie’s job is to find out where it originates from and to shut down the operation. Things get complicated when all signs point to an off-worlder noble, a man with power to spare, and a position that brooks no challenge.

Charlie’s life, however, is about to take a dangerous turn as powers of her own start manifesting, powers that seem to stem from her recent resurrection from death.

In The Better Part of Darkness, Kelly Gay has introduced a world filled with goblins and jinn, mages and sirens, all aliens to America from their off-world homes of Charbydon and Elysia. The world-building is strong and ever present, and Gay does a comendable job keeping the reader to pace with it all. Another appeal is Charlie – a woman torn up by her past while trying to navigate a shaky future. The other characters that populate this new vision of Atlanta are, mostly, just as well drawn. Sympathetic, intriguing, vile…all words that come to mind and can be applied to a number of the “people” we meet during the course of the novel.

While solidly urban fantasy, The Better Part of Darkness also has shades of a police procedural, with a mystery thread that amps up the action and tension.