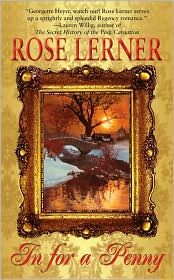 One thing a disreputable rake does not expect to return home to after a night of carousing with like-minded friends is news of his father’s death in a duel. That, Lord Nevinstoke learns, is like a slap to the face; the debts and resulting destitution left in his father’s wake, on the other hand, are like a punch in the gut. With little else to do, Nev resolves himself to sobriety and marriage, not knowing which will be the worst, and seeks out Miss Penelope Brown, the daughter of a wealthy merchant. It may be a risk to show his hand at the same time that he’s offering it up in marriage, but Nev, certain his honesty will brook a refusal, does just that. Having sworn off alcohol, he can’t even down a glass of brandy to settle the shock of her acceptance.

Access to Penny’s money doesn’t signal the end of Nev’s problems; there’s a family estate gone to seed, a conniving neighbor, workers on the verge of revolt, and a sister intent on engaging in conjugal acts without the benefit of marriage to contend with, too. Nev can’t seem to catch a break.  And then his dreadfully ill ex-mistress shows up, and that’s the final straw. Or so he thinks. But Nev learns that there is strength to be found in love, in the partnership of a solid marriage, and that Penny may increase his wealth in more ways than he ever imagined possible.

In For a Penny is a regency era romance novel that is refreshing and sweet. Both Nev and Penny are, for the most part, painfully honest with each other; Nev willingly owns up to his reasons for marrying her, and in return Penny gives him a bulleted list of things he cannot do once they are wed. Whether they knew it or not, they were laying the foundation for a true partnership from the start, and scenes in which they discuss finances or the state of Nev’s land inheritance shine a light on the very real relationship they develop. That in itself is highly appealing. As for the sweet: Both are fond of poetry, fiction, and music, and there are several scenes in which one will read or sing to the other. There are several sigh-worthy and “aww” moments to be found here. Add a dash of intrigue and smart plotting to the love story and you have one very fine regency.