Like many people, my to-read pile of books sets on my dresser next to my bed (unlike most people, I hope, the finished books are on a pile on the floor next to my 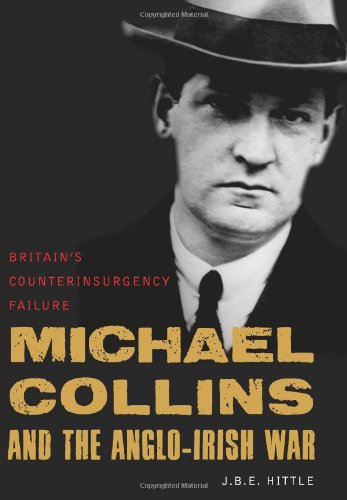 bed) and seems to be growing faster than I can read.  In this pile are a wide range of things: fantasy, sci fi, historical fiction but mostly it is history. Two weeks ago, just in time for the holidays, I worked my way down to Michael Collins and the Anglo-Irish War: Britain’s Counterinsurgency Failure by J. B. E. Hittle.

Now I know what you are thinking: what another biography of Michael Collins? The famous of Irish nationalist has had dozens of biographies each with it’s own particular axe to grind. For some he’s a patriot, to others a terrorist and to still others a grand standing ne’er-do-well. What makes this particular biography interesting is that it assesses Collins and the Anglo-Irish War purely from the perspective of a long term intelligence/counterintelligence operation.   Mr. Hittle is well equipped for this type of biography as he served for many years and an analyst and case officer in the CIA.

Hittle’s overall argument is that the Anglo-Irish was an English intelligence failure that Collins and his compatriots exploited. Because of this the book spends a lot of time laying out the various organizations gathering intelligence for the British in Ireland throughout it’s history including the Royal Irish Constabulary, the Special Branch of Scotland Yard, the G Division of the Dublin Metropolitan Police and during and following World War I MI5. He also walks the reader through how the Irish nationalist forces created their own highly developed intelligence organization right under the noses of the English. The book does not get lost in the bureaucratic humdrum of espionage. There are plenty anecdotes of spies and assassins and of life in war torn Ireland.

If the book has one failing it is that the various groups in play are almost impossible to keep track of. However this is no fault of the author. There were so many espionage organizations and paramilitary organizations operating in Ireland from 1919 to 1921 that I think it would be nearly impossible for any writer to keep the reader from being confused by it. For the English side, besides the organizations listed above, there was British military intelligence and the various intelligence groups of the paramilitary organizations like the Axillaries and the Black and Tans. On the Irish side many regions, counties and cities often times had their own uncoordinated intelligence.

If this kind of book strikes your fancy there are quite a few others on a similar topic available. T. Ryle Dwyer’s The Squad: and the Intelligence Operations of Michael Collins is probably the most similar although is focuses on Collins’s special assassination unit. Michael Hopkinson’s Irish War Of Independence gives a more broader view of the conflict. As a sort of prequel to Hopkinson’s book there is Tim Pat Coogan’s 1916: The Easter Rising