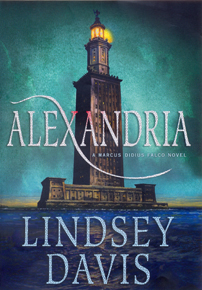 In the 19th book in this series, Roman detective Marcus Didius Falco travels to Alexandria with his family so that his pregnant wife can see the pyramids. This menagerie which includes, Falco and his wife, two young daughters, an adopted teenage daughter and Falco’s brother-in-law stays with Falco’s outcast uncle and his partner. As one might imagine, a relaxing vacation is not in the cards. Falco’s Uncle throws a dinner party honoring the librarian, Theon. The next morning Theon is found dead in a locked room and Falco is drawn into another case.

It may seem odd to jump into a series at book 19, but this novel certainly stands on its own. Davis brings Alexandria to life and the historical details seem to be spot on. Falco is straightforward and sarcastic like many a detective. The one thing that may be endearing to some but distracting to others, is that Falco’s speech feels very contemporary. It was not what I expected, but it made me like his character even more. He’s the kind of underdog hero you can get behind. I love that his wife, Helena Justina, is clearly smarter than he is and he knows it. Helena Justina and her slacker brother trade off as Falco’s investigative partners, tempering his abrupt manner.

Alexandria has historical office politics, a man-eating crocodile, scroll thieves, a classroom autopsy, intrigue, and the kind of  family drama that sitcoms are made of. Who knew ancient history could be so much fun?