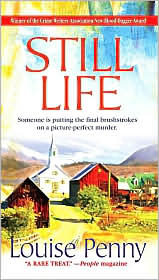 Life in Three Pines, a small, tight-knit town on the outskirts of Montréal, is quiet. Residents pass time in the company of friends, art, and various other clubs. Until the morning that Jane Neal, a beloved member of the community, is found dead in the woods.

Chief Inspector Armand Gamache of the Sûreté du Québec arrives on scene and sees evidence of a hunting outing gone fatally wrong. Until he looks closer.

With a team equally devoted to his command and justice and an astute town resident, Gamache begins to unravel a plot that has far reaching roots, and the one moment that set a killer’s plan in motion.

Still Life is rich in atmosphere, plentiful in likable, authentic characters, and smartly plotted. It’s a mystery that delivers on all levels; fans of police procedurals, cozies, or psychological suspense will find something within these pages to enjoy as Penny seamlessly blends each slant into the story.

I no sooner finished Still Life and left Three Pines that I wanted to return. As luck would have it, Still Life is the first in a series that gathers accolades and awards with each new installment. This is one mystery series that shouldn’t be missed.