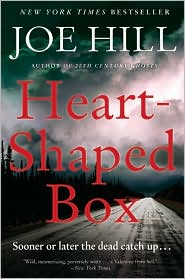 Judas Coyne, lead singer for a metal band,  has been living in semi-retirement on a farm in New York with his young goth girlfriend Georgia. Coyne has a collection of occult and morbid items, so when his assistant asks him if he’d like to buy a dead man’s suit (ghost included), Coyne doesn’t think twice. When the suit arrives in its heart-shaped box, Coyne can’t escape the clutches of the ghost – Craddock McDermott.

McDermott was the stepfather of Coyne’s last girlfriend, Florida. Coyne enjoyed a summer with Florida, but when none of his attempts to help her with her mental health issues seemed to work, he sent her back to her family. In life, McDermott  was a hypnotist and occasional dowser.  Coyne soon realizes that McDermott continues to use his hypnotic talents beyond the grave to seek revenge for Coyne’s treatment of his step-daughter.

It appears that the apple doesn’t fall too far from the tree, when it comes to writing. (Just look at the photo in the book and you’ll see the same is true for looks!) Joe Hill’s book is very well written and fast-paced. It was hard to put down. He has a knack for creating interesting characters and subtly changing the reader’s perception of them.  At  the beginning of the novel, Coyne and Georgia seem selfish and mean and McDermott seems like a harmless old ghost. But little by little I began to see the softer side of Coyne at the same time the truth about McDermott’s intentions becomes clear. Heart-Shaped Box was scary and disturbing, a nail-biting thriller perfect for Halloween.