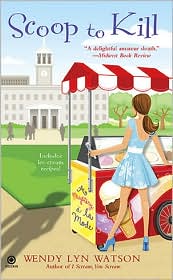 Publisher’s summary:
“During the local college’s annual Honor’s Day festivities, a graduate student is killed. When the English professor suspected of his murder also meets an untimely end, Tallulah Jones steps out from behind the counter of Remember the a-la-Mode to clear the professor’s name-before anyone else gets put on ice…”

Scoop to Kill is the second book in Watson’s Mystery a la Mode series featuring Tallulah Jones, though I didn’t clue into that fact until I was nearly done with it. My oblivion proves one thing: Watson did an admirable job of inserting enough background to quickly catch you up with the characters and the series’ premise. If you like cozy mysteries, but are a stickler for adhering to release order, you’ll want to begin with book one, I Scream, You Scream.

Want to know why I’ll be reading the third book in this series? Because I don’t know whose hand was squeezed. And I need to. I’m sorely tired of love triangles, but in this case it was underplayed and never overshadowed the mystery. Because of that, I have to know who Tally chooses: Cal, the steady as a rock police detective, or Finn, her first and still a little wild love.

Tally was a sweet protagonist, willing to do anything (and I do mean go above and beyond) for her family, well-mannered and unfailingly polite, but I didn’t click with her in the same way that I have with other amateur sleuths. Because she didn’t thoroughly engage me, my attention wavered every now and again. It didn’t help that I found myself frustrated with some of the characters, namely Tally’s cousin, Bree, and her niece, Alice; thought the discrepancy in how people – and by people I mean family vs. non-family – perceived the victim could have been further explored; and thought the pacing dragged in spots. I also would have loved a little more behind the scenes action in Tally’s ice cream shop; there were a few mentions of sundaes, shakes, and the French Pot method of making ice cream, but there’s always room for more, right?

I love cozies because, no matter the issues I have with them, they are always light, fun, and perfectly good company for a few hours. Scoop to Kill mostly fit that bill and, as I mentioned previously, I’ll give the third book, A Parfait Murder, a go when it’s released next June.