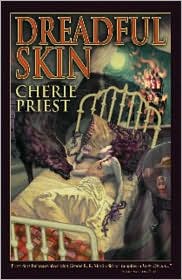 Publisher’s Summary:
“Jack Gabert went to India to serve his Queen. He returned to London a violently changed man, infected with an unnatural sickness that altered his body and warped his mind. Eileen Callaghan left an Irish convent with a revolver and a secret. She knows everything and nothing about Jack’s curse, but she cannot rest until he’s caught. His soul cannot be saved. It can only be returned to God. In the years following the American Civil War, the nun and unnatural creature stalk one another across the United States. Their dangerous game of cat and mouse leads them along great rivers, across dusty plains, and into the no man’s land of the unmarked western territories. Here are three tales of the hunt. Reader, take this volume and follow these tormented souls. Learn what you can from their struggle’s against each other, against God, and against themselves.”

Dreadful Skin unfolds in three parts, each standing solidly on its own, all implicitly connected, and follows Eileen Callaghan, former nun, secret-keeper, monster hunter. The brevity of the book, which clocks in at 228 pages and packs a whole lot into every single one, doesn’t allow for a substantial amount of character development and yet Eileen shines. Well, she shone for me, as Briar Wilkes in Boneshaker did before her, which makes me believe that I have an affinity for Cherie Priest’s tough-as-nails, resourceful heroines. That aside, I enjoyed Eileen’s narrative and would very much like to encounter her again, though it would seem there are no plans for more.

Part one, “The Wreck of the Mary Byrd,” opens five times over, focusing on five characters and their version of “how it happened,” which, really, are more accurately statements of how it began. This structure, a sort of fits and starts story telling, laid a thick layer of tension over the proceedings, keeping the reader a little off balance, constantly waiting for the quick-as-a-wink moment when everything was undoubtedly going to go wrong. And boy did it ever.

This first segment introduces John Gabret, more commonly known as Jack, who came back from India a changed man. Literally, as ever since Jack has a propensity to turn furry, fool moon or no. Though his crimes in London before he fled on the Mary Byrd were attributed to Spring Heeled Jack, a demonic creature that’s become something of an urban legend, they were in actuality the work of Jack’s werewolf nature. And Jack is…brutal. His conceit and desire to live make for a disturbing combination. Eileen knows what he is, but her knowledge of how to stop him is limited and flawed, and watching them grapple, literally and figuratively, amps up the aforementioned tension.

In hindsight, this was my favorite of the three stories, mostly because of the tight, claustrophobic quarters of the boat, the sense of real danger that came along with it, and a few excellent secondary characters. Additionally, the stakes were raised hugely for Eileen, and her continued pursuit of Jack takes on a much more personal tone.

Parts two and three, “Halfway to Holiness” and “Our Lady of the Wasteland and the Hallelujah Chorus,” are more closely related as they happen in short order time-wise and involve several of the same characters, and take place around a revivalist camp. While reading these two parts, I could see dirt being kicked up under heavy feet; hear the songs; feel the clapping reverberating in my chest. I wasn’t a casual observer; for a time, I was there, in the middle of it all. Priest draws her settings well. As for character, with one exception – a lawman that enters the picture in part three – I wasn’t enamored of the characters in the latter half of the book. I was saddened for a couple, experienced a pang of heart-sick distress for one, but I couldn’t say I liked the majority of them.

All things considered, I enjoyed the book a great deal.  I got behind Eileen and her plight, was intrigued by the stories, and consider Dreadful Skin a solid addition to the fantasy/horror genre.