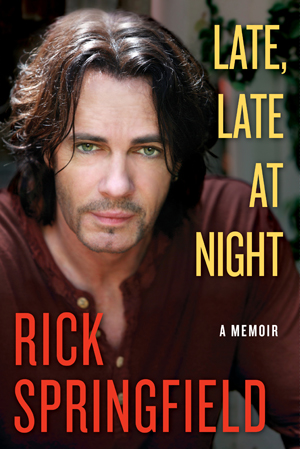 Rick Springfield’s recently released memoir is not for the faint of heart – or at least those clinging to the lily white image of Dr. Noah Drake.   While he managed to avoid the plague of drugs and alcohol, the rocker was admittedly a BAD boy for a LONG time. But in this intimate and not at all self important rock memoir, it’s hard not to like him.

Springfield exposes his vulnerabilities: depression which has followed him throughout his adult life,  sex, also a prominent part of his adult life and the enduring sadness over the illness and death of his father.  He’s also endearingly self-deprecating and sarcastic as he details his journey from Aussie punk to international superstar.  Fans will love the stories behind the songs and the hunky roles (Noah Drake especially).

He leaves nothing out – failures, embarrassments and his lowest points of shame (including but certainly not limited to blowing off Eric Clapton who’d asked to meet him back in the ’80s).  One wonders how many bridges he’s now burned having included so many names of celebrities and friends, but the one person who’s privacy he guards completely is his wife of nearly 30 years.  He bares his sins but refuses to explore with equal detail the pain his infidelities have caused “his girl” who for better or worse has stood by him. A respectful thing to do, but it’s impossible not to imagine what she had to say about his exploits.

What makes his story so engaging is its simplicity.  In fact, it has more of a spoken feel as if he’s unburdening himself to a close friend.  The audio version, read by Springfield himself should be even more telling.

One thought on “You know I wish that I [was] Jessie's Girl! (sort of)”