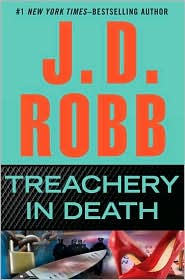 After Lieutenant Eve Dallas suggests that her partner Detective Delia Peabody could use some practice on her footwork, Peabody decides to work out out in the NYPD’s old, rarely used gym as opposed to the new state of the art one which many of her well- toned colleagues avail themselves of. She has the place to herself, and is showering when she hears voices and quickly realizes she’s overhearing an argument between two cops over a deal gone bad which resulted in an informant being murdered to cover it up. The two police officers are Lieutenant Rene Oberman, and Detective William Garnet. Hiding, completely vulnerable, Peabody waits until they leave, knowing that if they discover her they will kill her. As soon as Dallas and the rest of the team find out their reaction is swift. As Dallas puts it: “The blue line breaks for wrong cops.” Thus begins the 33rd book of the “In Death Series” and while the gang have faced evil before never has it been from within their own ranks. In this story Dallas will face off against an enemy that while known, is not so easily caught. Standouts include a great scene with Eve and Sommerset, and a laugh out loud one of Eve with Mavis and her baby. Webster from Internal Affairs also has quite a role in book which makes him a lot more inviting of a character. The actual story is great and even though there aren’t any surprises and you know exactly who the villains are, Ms Robb so skillfully weaves an intricate tapestry of her characters and the plot that the book moves swiftly along right up to it’s much anticipated knockout conclusion. I believe this is one of the best “In Death” books in the series. While some characters you don’t see much of of at all like Charles, Leonardo, and Nadine, many others make some welcomed appearances. Of course I’m still hoping for an 800-1000 page “In Death” book which has everyone in it!