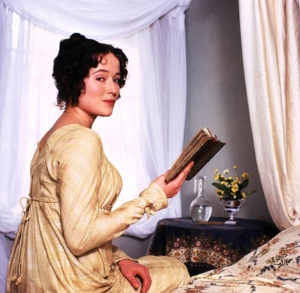 “Elizabeth Bennet, the second eldest in a family of five daughters, is possessed of “a lively, playful disposition, which delighted in any thing ridiculous” and a healthy dose of scorn for her silly sisters. Her father’s favorite, Lizzy is headstrong, sharp-tongued and quite proud of the fact that she has what her father calls “something more of quickness than her sisters.” To that end, she has a — dare we suggest — hipsterish tendency to judge everyone around her. But she’s still a romantic to some degree, rejecting the notion that she should marry for money, and wanting instead to find a man she actually likes. And one who isn’t her father’s cousin. Seeing as she’s a savvy, smart-aleck of a girl with a good head on her shoulders, we think she’d be into wry, intelligent indie rock and all the hipster classics.” [via Flavorwire]

Click through to see which songs and artists made Elizabeth Bennet’s playlist.

Have a song you think Elizabeth Bennet would have enjoyed? Leave it in the comments!