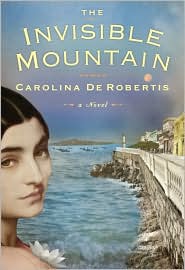 If you are a fan of writers like Gabriel Garcia Marquez or Isabelle Allende, you may want to pick up a copy of The Invisible Mountain. In her debut novel, Carolina De Robertis  tells the story of three generations of a family in Uruguay. Ignazio fled Venice and his family’s gondola shop after his father, in a drunken stupor, beat his mother to death. When he lands in Montevideo, he joins a carnival as a carpenter and travels from village to village until the night when he is asked to fill in as the magician. His volunteer from the audience, Pajarita steals not only the scarf that was up his sleeve, but also his heart. The two marry and settle down in Montevideo. Their lives are never simple. Ignazio and Parajita’s family stretches and grows as does the city of Montevideo.

As a lover of historical fiction and magical realism, I was immediately drawn into this book.  De Robertis creates three generations of strong women and their flawed men with plenty of magic, poetry, revolution and romance. I have to admit that I knew very little about Uruguay before I read this book. I couldn’t help but feel the hope of a new nation and the brutality of the ensuing dictatorship. While her writing is often beautiful, she never romanticizes the experiences of her characters. While a family saga like this might lose steam, the ending to The Invisible Mountain, is just as magical as its beginning.