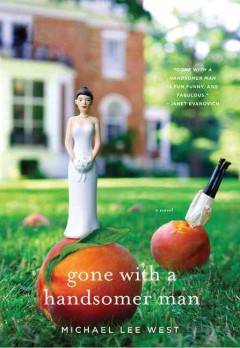 Teeny Templeton is having a pretty bad week.

1) She’s cancelled her wedding – having just discovered the skanky pastimes of her philandering fiance.
2) She’s just been bailed out of the slammer – having been arrested for assaulting said fiance and his naked paramourS with unripe peaches.   And…
3) She’s now a prime murder suspect – having stumbled upon her dead former fiance while violating the restraining order against her.

Crazy and culinary best describe the quest to clear her name.  Aided by an eccentric group of characters, Teeny battles to prove her innocence while breaking more laws and dreaming up delectable yet vengefully toxic desserts (e.g., You’ll Get Yours Peach Icing) to share with those who stand in her way.

Similar to Janet Evanovich and Johanna Fluke, Gone With A Handsomer Man is off the wall and unpredictable, but also packed with southern charm and screwball comedy.   Not to be taken too seriously, this book is just a plain fun.