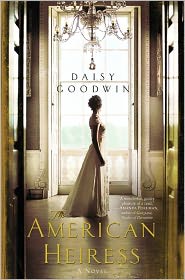 Beautiful Cora Cash (yes, that is really her name), is a wealthy Nouveau Riche American who has everything but a titled husband. Set in the 1890s, appearance is everything when you’re acquaintances with the likes of the Vanderbilts. Unfortunately for the Cash family, although they are the wealthiest, they are still looked down upon because their fortune comes from trade. But, like so many formidable mothers before her, Mrs. Cash will let nothing deter her from making her daughter the envy of Newport’s high society, so she drags Cora off to England in order to procure her a royal marriage. Will Cora manage to marry for love and fulfill her mother’s ambitions?

I mostly loved this book, but there were a few things that drove me crazy. I’ll start with the not so good stuff first. Both Cora and her Duke are at times stuffy, selfish, and completely self-involved. However, Cora’s demeanor changes quite a bit when she travels to England and is treated abysmally by the the Ton. You actually start to feel quite sympathetic toward her. She starts to reach out to people and she’s either looked down upon or betrayed. Which brings me to the Duke whose name should be next to the word insufferable in the dictionary. While being candid about his need for her family’s money in order to make necessary repairs to his dilapidated estate, he also professes to love Cora. Yet, time and time again, as she desperately tries to do things to make him happy, she is rebuffed. Even the servants pick up on this and treat her with disrespect. Thank goodness for her own maid who she brought with her from Newport. While Cora hasn’t totally appreciated her loyalty in the past, this starts to change a bit. That all said, there is a sense of realism regarding this. Cora and the Duke are definitely products of their time and places in society. I actually quite liked Cora at the end, but the jury’s still out on the Duke. Ms Goodwin descriptions are beautifully written about everything from the clothing and houses, to the surrounding countryside. She also manages to put a unique, dramatic spin on what could have been your typical light Historical Romance. If she decides to write a sequel, I would definitely be interested in reading it.

Check the catalog for The American Heiress.

One thought on “The American Heiress – Daisy Goodwin”