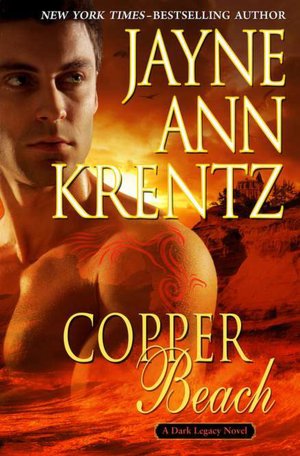 Abby Radwell has an unusual psychic talent. She’s able to find, unlock and channel psychic energy from so called “hot books” and use it to disable people. After a near deadly incident in a client’s library, Abby receives a blackmail threat, and decides to hire an investigator and bodyguard named Sam Coppersmith who is a specialist in in paranormal crystals and amber “hot rocks”. Together they’ll need to pool their talents to track down an old alchemical tome known as “The Key” before it falls into a killer’s hands.

On the plus side, Jayne Ann Krentz’s Copper Beach which is the first book in a new trilogy, continues her talent for writing unique paranormal stories which don’t feature vampires, werewolves, faeries, etc. Also, while alas, there are no vicious dust bunnies, there is a rather cute dog named Newton, who steals every scene he’s in. Which brings me to the downside. Newton is the most interesting character in the entire book. Unfortunately, Abby and Sam are no different then any of the characters in the authors previous books. I liked them, but they’re all just starting to meld together. The plot, which was also similar to some of Jayne’s previous stories, was exciting enough to keep me reading though. I’m hoping that the second book Crystal Gardens, which is coming out the end of April will have more memorable characters.

Check the catalog for Copper Beach