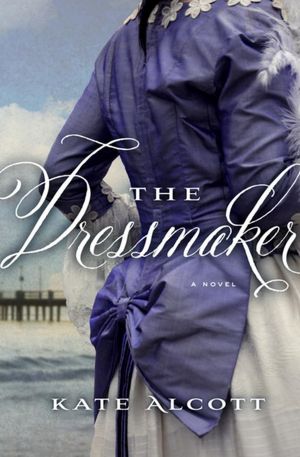 Tess Collins is a young aspiring dressmaker who is desperate to get on the Titanic in order to make her way to America where she’ll hopefully have better luck. Fortuitously she happens upon Lady Lucille Duff Gordon who herself is a famous dressmaker and is on her way to an upcoming spring fashion gala in New York City. She hires Tess as a maid, but soon recognizes her talent and has her helping with the dresses for the show. Tess also meets two completely different men while on board. One, a sailor named Jim who early on shows compassion and courage, and Jack, a twice divorced millionaire who is equally likable. After the sinking of the Titanic, Tess must not only navigate through the tragic aftermath, but also her relationships with both men.

The Dressmaker, which has come out on the heels of the 100th anniversary of the sinking of the Titanic, is very different from any other books I’ve read on the subject. From the time Tess steps on board the doomed ship to when it actually sinks is covered in less than 50 pages. The majority of the book is spent analyzing the aftermath including the hearings which took place in an attempt to discover what exactly went wrong. Although there are quite a few characters including Lady Duff Gordon and her husband Cosmo that actually existed, readers do need to remember this book is historical fiction, and that there are some inconsistencies regarding timelines etc. That said, I think Kate Alcott wrote a very interesting portrayal of the survivors and how their actions were viewed by the public and the press. There is also a brief look into the world of dressmaking and the changes that were happening at the time. She even gives us a brief glimpse into the suffragette movement. There are also some outstanding characters besides Tess herself. There is Pinky Wade, who while a fictional character, is a fabulous representative of the female reporters of the era. Also, the character of The Unsinkable Molly Brown is wonderfully written and she plays an important role throughout the book. My favorite character is Jim who truly represents all the heroes of that tragic night. Finally, I have to mention Lady Lucille Duffy Gordon. Although she and her husband’s actions did not exactly represent the best of humanity, (their boat was dubbed “The Millionaire’s Boat” due to the fact that despite having seating for at least 60 people, only carried twelve survivors and there were questions of people struggling in the water, attempting to get in the boat, only to be pushed back), I don’t think anyone can argue that they are fascinating. Another survivor who tossed a shawl over her husband so he would look like a woman because she could not bear to lose him only to have him commit suicide after they are both pilloried in the press had this to say at the hearings. “What I believe now is that accepting the reality of my decision is what is important. I can’t forgive my actions, or the actions of another…I want to acknowledge that my character was not strong enough to be brave, and if any others secretly feel the same please know you are not alone. I can only hope that if tested again, I would be up to the task.” This quote is one of many that Ms Alcott took directly from the transcripts of the hearings and to me it is one of the most memorable. For the most part, even people who acted less than honorably that fateful night were not outright villains. They were people who when faced with something that they could never fathom, reacted in different ways. And from what I’ve read, for every act of cowardice or weakness, there were far more of bravery and sacrifice. If I have one complaint about this book it’s that given all the different subjects it touched upon I wish it was a bit longer than 304 pages. I feel that there were some parts that were rushed or cut because of the short length. However, I highly recommend this to fans of Titanic lore who want a slightly unique take on the tale.

Check the catalog for The Dressmaker