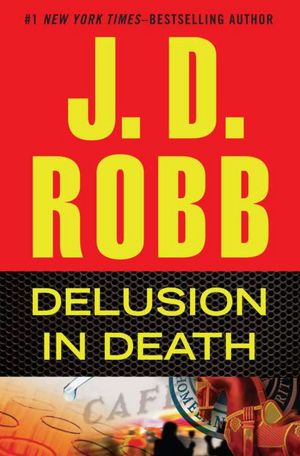 Just a typical weekday after work at a happy-hour bar downtown, where people can unwind with a few drinks after a long day. Unbelievably after only twelve minutes eighty people lay dead. And what’s worse, it’s a result of them attacking each other. Surviving witnesses describe headaches right before it started and then horrific hallucinations leading to overwhelming feelings of fear, and rage. Forensics discovers that someone deliberately let loose an airborn cocktail of chemicals and illegal drugs that would drive anyone temporarily insane. It is now up to Lieutenant Eve Dallas and her intrepid team to discover who would commit such an evil act before it happens again.

J. D. Robb has managed to do it again. Delusions In Death immediately pulls you in and keeps you reading through the wee hours of the morning. This is one of Eve’s most frightening cases yet because of its plausibility with the daily terrorist threats in today’s world. While I would definitely call this one of Ms Robb’s more plot specific stories, she definitely doesn’t skimp on her characters. Eve and Roarke are still dealing with the aftermath of the events in “New York To Dallas”. This leads to some very touching moments between them as well as Eve and Mira, and Peabody. Eve’s and Sommerset’s relationship also takes an interesting turn. She also goes gives us more information regarding the history of the Urban Wars than she has in any of the other In Death Books thus far. Readers get to see almost all their favorite characters even if it’s only briefly. In my humble opinion Delusions In Death is one of her strongest novels to date. As usual, a word of warning: you must read these books in order as the author makes frequent references to people and events that popped up in previous books. This series should appeal to lovers of mysteries and romantic suspense.